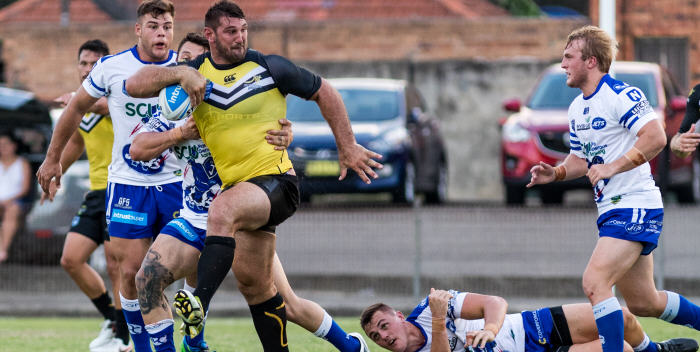 Last Saturday’s heatwave failed to prevent the Newtown Jets staging a successful trial match at Henson Park against the Canberra Raiders partnership club, Mounties. Fortunately for both teams the kick-off time was put back to 7.00pm and the weather started to cool down after about 15 minutes. Mounties led 12-4 at half-time and the match ended in a 12-all draw.

Newtown used 24 players in the match and Mounties 29. The Jets fielded just seven players with recent Intrust Super Premiership (ISP) experience, whereas Mounties had many more in their squad with extensive !SP game time. Mounties fielded an interesting identity in the former Australian and Queensland State of Origin representative David “The Coal Train” Taylor, who is trialling for a contract with the Canberra Raiders.

Mounties led 6-0 after twenty minutes and 12-4 at halftime, with Jets winger Leigh Higgins scoring in the south-eastern corner right on the halftime siren. Taking into account their extra men on the bench and their greater pool of ISP experience, it was expected that Mounties might take control of the game in the second half. Instead the Jets turned on a committed and disciplined defensive performance, in keeping Mounties tryless in the second half and drawing level with the visitors with ten minutes left to play.

Outside backs Tyla Tamou and Haydn Peacock scored for Newtown in the second half. All three of the Jets tries were scored out wide and the third conversion attempt struck the left-hand upright and bounced away.

Coach Greg Matterson said there was plenty to take out of this game, given the tough playing conditions and that Mounties had fielded a very strong team. There was plenty of improvement needed in Newtown’s attack but this was only the team’s second game together. Matterson singled out Luke Towers, Jaimin Jolliffe, Jayden McDonogh and Jordan Galloway for special mention on an evening where everyone in the Jets squad had made a strong contribution.

The Jets return to Henson Park next Saturday, 18th February, for their final trial match against Wests Tigers. This game is timed for kick-off at 6.00pm and will be preceded by a Holden Cup trial between Cronulla Sharks and Wests Tigers at 4.00pm.

This match was played on one of the hottest days in NSW history.