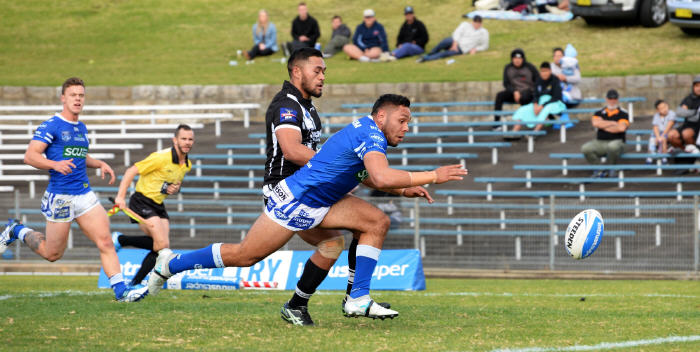 Newtown’s 22-10 loss to Wentworthville at Henson Park on Saturday keeps the Jets just outside of the top eight, but they still remain in finals contention. Late changes to Newtown’s team line-up contributed to what was a hard-working but disjointed display, with any element of luck on the day staying well clear of the Jets.

Newtown opened the scoring early in the game when the Samoan and USA rugby league international Joseph Paulo fired out a well-directed cut-out pass to winger Leigh Higgins, who scored in the south-eastern corner. The Jets had the better of the opening twenty minutes but the visitors had more ball and territorial advantage in the second quarter. Wentworthville took advantage of two Newtown errors at their own end and scored two tries to take a 10-4 lead into halftime.

With both teams desperate to take the competition points, Wenty had their share of luck at vital moments. The visitors scored twice against the run of play, with the circumstances of their third try summing up Newtown’s afternoon. The Jets were on the attack inside Wenty’s twenty-metre zone and chip-kicked into the right hand corner. This attacking ploy backfired and ended in Wentworthville racing away to score a 95-metre try. The Jets showed plenty of endeavour and spirit late in the game but couldn’t bridge their opponents’ twelve-point margin.

Newtown’s best player was once again front-rower and captain Kurt Dillon, who certainly is one of the most outstanding props in the Intrust Super Premiership competition. Winger Leigh Higgins also played well, and the former Knights and Raiders hooker Adam Clydsdale was very busy in defence and played a lot of minutes on his debut for Newtown.

The Jets have a bye this coming weekend and will be back at Henson Park on Saturday, 22nd July, when they are drawn to play the New Zealand Warriors at 3.00pm.