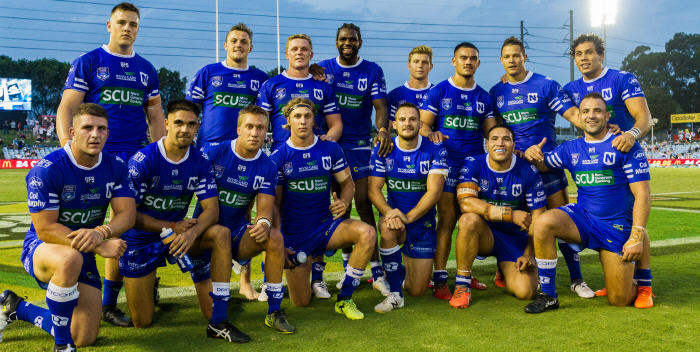 Jets face up to tough opposition this Sunday

The Newtown Jets meet Blacktown Workers Sea Eagles this Sunday afternoon at the H E Laybutt Field. The Manly-Warringah partnership club is coming off a 46-0 win against Wentworthville and there are several players with NRL experience in the Sea Eagles team list. The former NSW State of Origin, Manly-Warringah, Canterbury-Bankstown and Newcastle Knights halfback Trent Hodkinson is named in the Jets team along with former Sharks Holden Cup five-eighth Kyle Flanagan.

Newtown’s team for Sunday (as named in Big League magazine) is:

Sunday’s Jets-Sea Eagles match will be broadcast live on http://triplehfm.com.au  or on 100.1fm

Front-rower Daniel Vasquez comes into Newtown’s team for Sunday. Daniel is a product of the Cronulla Sharks NYC system and may well be the first player of Chilean heritage to turn out with the Jets. He is an Australian Schoolboys and NSW under 18’s representative. Five-eighth Jack Williams was concussed in last Thursday’s win against St George-Illawarra and is being rested for this round.

The Newtown RLFC was represented at a function held recently at Leichhardt Oval to honour the personal courage shown by the former Balmain Tigers second-rower Dennis Tutty. In 1969 he challenged the NSWRL player transfer system that was in place that prevented rugby league players from switching clubs, even if they were off-contract. Tutty’s principled stance was honoured by Darcy Byrne, Mayor of the Inner West Council and by Ian Prendergast from the Rugby League Players Association. The occasion was reported on by SMH journalist Adrian Proszenko:  https://www.smh.com.au/sport/nrl/why-the-nrl-s-rich-stars-owe-a-debt-to-the-legendary-dennis-tutty-20180303-p4z2oj.html

The NSWRL has advised the following as a list of their media coverage of the 2018 Intrust Super Premiership NSW competition:

Just wanted to alert you to a few things we’re doing this year on NSWRL.com.au:

– Around the grounds summary > published Sunday/Monday

– Team of the week > published ASAP Monday or Tuesday

The Newtown Jets lads of 2018 pose for a group shot after defeating St George Illawarra 24-12 in the NSWRL Intrust Super Premiership second round match played on Thursday evening, 15th March.

The game was played at the Southern Cross Group Stadium as the main curtain-raiser to the Cronulla Sharks v St George Illawarra NRL local derby.

The Tom Kirk Cup is also missing – one of the Dragons officials must have been slightly tardy in bringing the trophy down from the grandstand.

Word has it that the highly efficient and popular Jets administration manager Olga Lauricella was seen swanning around the Southern Cross Group Stadium precincts with the Tom Kirk Cup during the Sharks-Dragons NRL showdown!

The players in the photo are:

Back row – left to right: