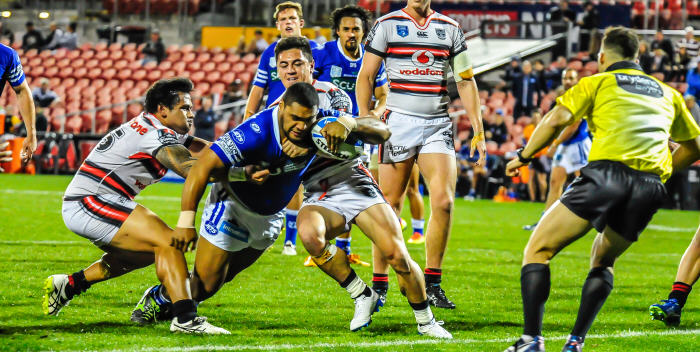 Jets forwards lay the foundations for a memorable victory

It might have been played in front of a sparse crowd at far-flung Penrith, but Newtown’s 22-18 elimination semi-final win against the New Zealand Warriors on Sunday evening was probably one of the club’s most significant victories in recent years.

The Jets defied the widely-held truism that the team with the most players with NRL experience will usually win an Intrust Super Premiership match. The Warriors fielded twelve players with NRL experience on Sunday as opposed to Newtown’s six, but the Jets out-bustled and out-enthused their bigger opponents. The scores were 8-all at half-time but Newtown broke out to a 20-8 lead early in the second half and hung on for their eventual 22-18 win.

The match was shown live on Fox Sports and broadcast live by Steele Sports.

Warriors kicked off to the southern end of Pepper Stadium.

Warriors in possession for an extended period at Newtown’s end.

13th min: Penalty to Newtown 40m out from the Warriors line.

14th min: Josh Cleeland dummies his way across the line to score 10m to the right of northern goal posts.

The crowd might be small but the Jets supporters are in full voice.

20th min: Anthony Moraitis does a great one on one steal.

NZW lose the ball close to Jets line, then Newtown gets a reliving penalty

27th min: Cross-field kick by Nu Brown into the northern left-hand corner, grounded for a try by Corin Smith

Penalty to Newtown in 34th min was badly needed

Flamboyant ball-play by NZW ends in a Crossfield kick into right-hand southern corner, caught on the full by Henare Wells who scores.

42nd min: Matt McIlwrick backs up the middle and gets to the line just to the left of the southern goal-posts.

NZW turn the ball over twice in quick succession.

Warriors starting to look disorganised and slightly panicky, tending to run one out.

51st min: Borderline pass by McIlwrick to Kurt Kara sees the Waikato product run a superb angle to score under the posts.

Now the NZW have a task in front of them.

Jets forwards starting to play like men on a mission.

Newtown attacking the NZW line; six again to the Jets then they get a penalty in the 59th min.

Penalty is in front of the posts.

Nu Brown kicks the penalty goal and the Jets lead 22-8 in the 61st min.

More strong Newtown defence on their own line

Jets playing smart, running down the clock and kicking into the corners.

Jason Schirnack went off with a leg muscle injury in the second half.

Josh Cleeland is helped off in the 75th min.

Frenetic ball play by NZW but the Jets defend the last set.

Newtown’s Kurt Capewell nominated as the ISP NSW Player of the Year. Kurt didn’t win the award but our inside mail is that he went very close.