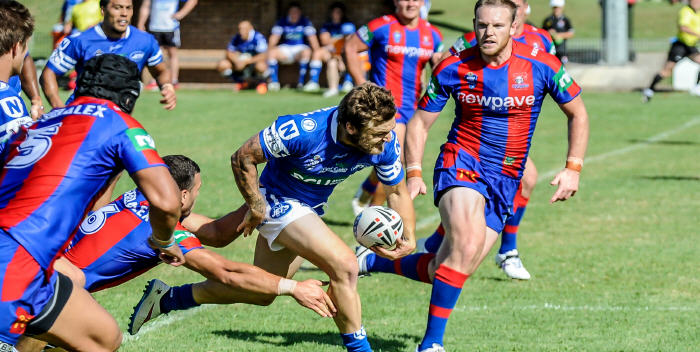 Jets get close to victory in Kurri

Last Saturday’s second round NSW Cup match at Kurri was another occasion where the Newtown Jets were right in the contest, only to be denied the result in the game’s latter stages. The Newcastle Knights led 16-6 at halftime but Newtown came right back into the game trailing by 20-16 with less than ten minutes left to play. Two late tries to the Knights ensured last year’s Grand Finalists a 32-16 victory.

There was plenty of history on show at the well-appointed Kurri Kurri Bulldogs home ground. The Newcastle Knights have a commendable policy of taking most of their stand-alone NSW Cup home fixtures to the home grounds of the various Newcastle Rugby League district clubs. The grandstand at the Kurri ground is named after their famous local product John Sattler, and it is also the Rugby League ground where Newtown product Johnny Raper ended his distinguished playing career as captain-coach of the Kurri Bulldogs club back in 1974.

Saturday’s Jets-Knights match had similar playing trends to Newtown’s first round loss to Wests Tigers. The Knights had a bigger share of possession in the first half and poor execution by the Jets’ outside backs and conceding penalties gave the Novocastrians plenty of first-half attacking opportunities. Other errors such as not finding the line from a penalty kick and dropping the ball on the first tackle further contributed to Newtown’s difficulties.

Newtown fought back well in the second half and when they trailed 20-16 with sixteen minutes left to play, the game was there for the Jets to win. Coach Greg Matterson commented that this had been another winnable game and the Jets need to collectively develop a tougher, more ruthless mindset to come from behind and ensure themselves a favourable result. The Knights were a good enough side to take full advantage of Newtown’s errors at critical stages of the game.

The Jets coaching staff rated Tim Robinson, Ray Moujalli and Kurt Kara as the best of the forwards, with Blake Ayshford and Todd Murphy the best in the backline division.

The Newtown Jets face another tough opponent by way of the in-form defending premiers Penrith Panthers next Saturday, 21st March, at the Pepper Stadium (Penrith), commencing at 3.00pm.