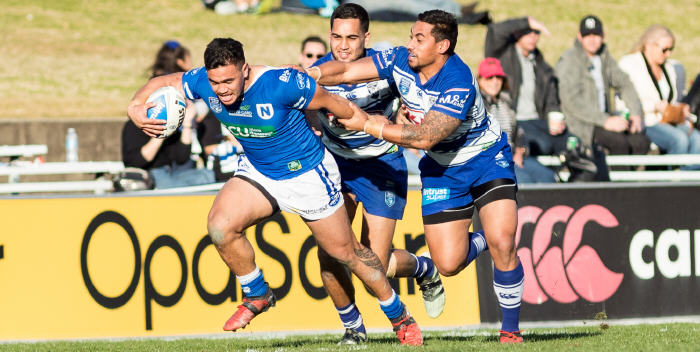 Centre Reubenn Rennie (with the ball) was a very useful mid-season recruit and he has signed again with the Jets for 2018. Photo: Mario Facchini (MAF Photography)

Jets get cracking on the player recruitment front

After a somewhat underwhelming rugby league season in 2017, the Newtown Jets are determined to bolster their own playing ranks as they head into the 2018 NSWRL Intrust Super Premiership (ISP).

Long-serving Director and financial benefactor Terry Rowney says the Jets are looking to strengthen their own playing roster, while being aware they will receive quality reinforcements from their NRL partnership club, Cronulla Sharks.

The Jets this week announced the signing of powerfully-built front-rower Wes Lolo who has been at Wests Tigers for the past two years. The 23 years old Lolo weighs 115 kg and is a product of Mascot Jets juniors and the St George-Illawarra Holden Cup team.

Another player to commit to the Jets for 2018 is the hard-running second-rower Anthony Moraitis, formerly with Cronulla and the Canberra Raiders, who made a strong impression with Newtown in 2016.

Front-rower Malakai Houma has fully recovered from a bad leg injury in early 2017 and he is keen to make an impact in the new season. Fullback Leigh Higgins, centres Matt Evans and Reubenn Rennie, back-rower Jayden McDonogh and front-rower Jimmy Jolliffe are all back on the Jets books for 2018.