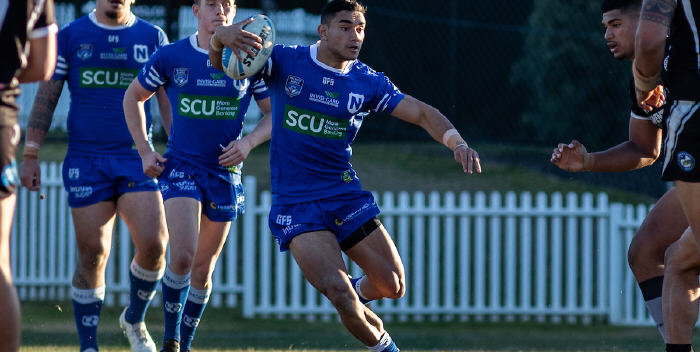 Newtown Jets winger Tyla Tamou (with the ball) was called up for yesterday’s match against Wentworthville, and he showed great dash in scoring an important try early in the second half. Photo: Mario Facchini, mafphotography

Jets hang on for victory in a close encounter

The Newtown Jets had to fight for their lives in their 22-18 win against Wentworthville at Ringrose Park on Sunday afternoon. The match was in stark contrast to Newtown’s 50-24 romp against the same opposition at Henson Park three weeks ago.

The Jets raced to a 10-0 lead after thirteen minutes, through tries to winger Bessie Aufaga-Toomaga and tough lock forward Billy Magoulias. Wenty struck back with a converted try in the fifteenth minute, and it wasn’t until three minutes before halftime that the Jets added to their points tally. Prop Jimmy Jolliffe steamed onto a crafty inside pass from halfback Kyle Flanagan for Newtown to take a 16-6 lead into the break.

The Jets looked to be well in control when winger Tyla Tamou scored a fine individual try early in the second half. Flanagan converted from the sideline for Newtown to extend their lead to 22-6.

Wentworthville had the better of the second half, assisted by a succession of penalties and a bigger share of possession. Wenty scored two converted tries and trailed by just four points with all of twenty minutes remaining. Newtown’s on-line defence was repeatedly tested but the Jets held fast and managed to defend their slender lead for the remainder of the game.

Hooker Blayke Brailey had an outstanding game for Newtown, and he received staunch support from front-rower Ava Seumanufagai and Billy Magoulias. Newtown’s forwards all contributed strongly on a day where the game was decided largely through the battle of the two forward packs. Wenty had done their homework following their belting at Henson, and put a lot of pressure on Newtown’s ball players and play-makers with some ferocious hits.

The Newtown Jets are back at home next Saturday, 28th July when they take on the competition leaders, Penrith. This match kicks off at 3.00pm, and it is also the annual Beer, Footy and Food Festival Day at Henson Park. There is a Jersey Flegg curtain-raiser between Cronulla Sharks and Penrith at 12.45pm.

Here are the highlights from yesterday’s match at Ringrose Park: https://www.nswrl.com.au/news/2018/07/22/jets-edge-magpies-in-nail-biter/

Newtown’s Ron Massey Cup partnership club, Glebe-Burwood, was convincingly beaten 38-16 by St Marys on Saturday afternoon. The Dirty Reds (aka the Wolves) are still in third place in the Ron Massey Cup competition.

This the third year of the Beer, Footy & Food Festival and it’s on at Henson Park next Saturday, 28th July, starting from 12 noon.
Are you ready for the best in the Inner West?
The Beer, Footy & Food Festival (BFF) returns for its THIRD year and we are going BIG!
If you love full flavoured beer, great tasting food and a Saturday afternoon watching rugby league as much as we do, then sitting on the famous Henson Park hill watching the mighty Newtown Jets is where you need to be.
This year’s BFF has even more brewers, we’ve got even more food, we’ve got more events for the kids, and the 3rd placed Newtown Jets take on the NSWRL Intrust Super Premiership competition leaders, Penrith.
Ask yourself, what could be a better day then this?
It’s $15 for entry, and $5 for Newtown RLFC Members.