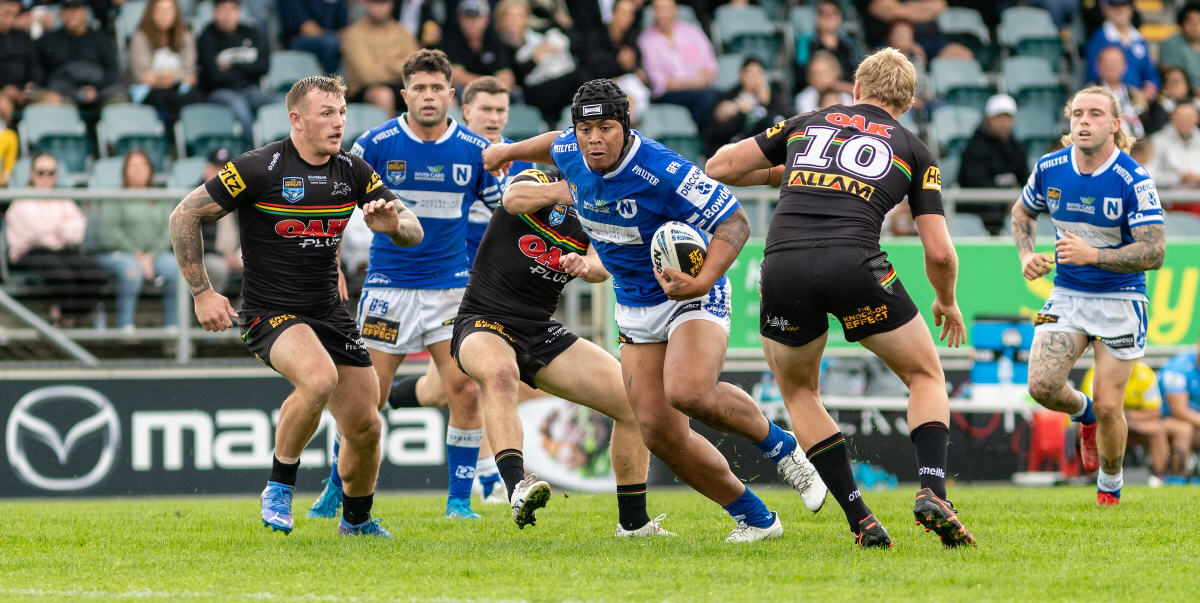 The splendid Franklin Pele bursts through the Penrith defensive line, with team-mates (from the left) Tyler Slade, Kade Dykes and Jayden Berrell in the background. Photo: Mario Facchini/mafphotography

The Newtown Jets were beaten 26-12 by Penrith in the eighth round Knock-On Effect NSW Cup match played at the St Marys Leagues Stadium on Saturday afternoon.

This match was a confrontation between the two competition leaders (Penrith in first place and Newtown in second) and was a closer encounter than the score indicates.

Penrith led 12-0 after sixteen minutes and by 18-6 at halftime, but the second half was a more even contest. The defining difference between the two teams in the first half was that Penrith made better use of their field position and attacking opportunities on the occasions they were at Newtown’s end of the field, whereas the Jets found it more difficult to penetrate the famed Penrith defensive wall.

Despite the Panthers scoring three tries in the first half, the match had the anticipated intensity and fiery moments to be expected in a showdown between the competition’s two leading teams.

It is worth noting that Penrith fielded 14 members of their full-time squad, including their entire “spine” that played on Saturday. The Panthers presented as the well-prepared and capable NSW Cup team that has been the benchmark for this year’s competition.

There were some good signs for Newtown from this performance, and head coach Greg Matterson said that were clear lessons for his players in maintaining better discipline and incurring fewer penalties at the opponents’ end of the field.
Newtown’s defensive effort was very committed in the second half, and at one stage they repelled the Panthers for four sets in a row on the Jets’ line.

Matterson felt that this game would be a good lesson for his younger players with regard to needing to step up several aspects of their overall performance against top level teams.

Newtown was best served in the forwards by Liam Harris, Caleb Uele and Jesse Colquhoun and in the backs by Matt Ikuvalu. Centre Addison Demetriou proved his tough calibre when he took a power of punishment from the Penrith defenders.

The Jets cross the Harbour Bridge next Sunday, 8th May, for an appointment with the North Sydney Bears at North Sydney Oval at 3.00pm. Following this past weekend’s fixtures, the Bears are in second place on the NSW Cup competition table and Newtown is third.

This ninth round fixture between the two 1908 Foundation Clubs is also the first leg of the 2022 Frank Hyde Shield series.

Weather: Temperature was 18 degrees; overcast early in the game, then sunny; high humidity.