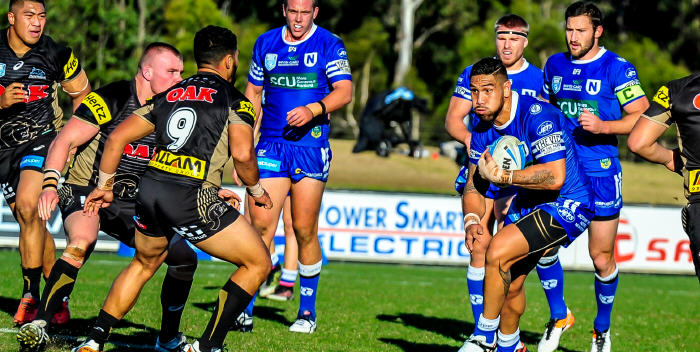 Report on the 16th round ISP NSW match between Penrith and Newtown, played at St Marys Stadium on Saturday, 25th June 2016 by Glen ‘Bumper’ Dwyer.

On the previous Saturday the Newtown Jets had scored a runaway win at home against the then-Intrust Super Premiership leaders, the New Zealand Warriors. Last Saturday at St Marys Stadium the Jets came up against the in-form and very strong Penrith Panthers team and were blown away 60-6.

The Jets went into this 16th round match with a less than full-strength team sheet. A succession on injuries to several key players during the game left Newtown with no replacements on their interchange bench for the last fifteen minutes. This was the Panthers fifth win in a row and the Mountain Men have most assuredly thrown down the gauntlet to the rest of the ISP NSW clubs as to who is on the rise in premiership aspirations. The presence in Penrith’s ranks of an NRL veteran like Jamie Soward, with his on-field organisational skills, astute kicking in general play as well as his ten successful conversions, was anything but a negative factor.

This match was still a contest up until the 28th minute of the first half. Penrith led 12-6 and Newtown was in a strong attacking position and looking dangerous. The Jets ball movement broke down and the Panthers then scored a converted try in the next set. To add to Newtown’s problems, their highly effective hooker and dummy-half Matt McIlwrick left the field with an eye injury and was finished for the day. Penrith went on to add two more converted tries before halftime and went in at the break with a 30-6 lead.

Any Newtown supporters who recalled the Jets hauling in a 30-6 points deficit against Penrith two years previously at Allianz Stadium found that history rarely repeats itself. A succession of injuries further depleted Newtown’s ranks and the Panthers added a total of five more tries in the second half. Penrith had close to seventy per cent of possession in the first half and no doubt defensive fatigue as well as the disruption caused by injuries added to Newtown’s woes.

Newtown clearly missed the play-making services of slick halfback Fa’amanu Brown, who was on NRL duties with the Cronulla Sharks. This of course is all part of the partnership arrangements between NRL and ISP clubs, and there are likely to be critical games every season where an ISP club’s depth in playing strength is bound to be tested.

The Jets undertake an interesting change in routine this Friday. In order to accommodate the rescheduling requirements of their postponed 13 round match, Newtown will play the Illawarra Cutters on Friday night, 1st July at Henson Park with the kick-off timed for 7.00pm.

Newtown’s last Friday night competition match at Henson Park was a semi-final ten years ago. The Illawarra Cutters are another ISP NSW club with impressive recent form, and they will travel to Henson Park on Friday night on the back of four consecutive wins. The Cutters are now in third place on the competition table and the Jets are one point behind them in fourth position.