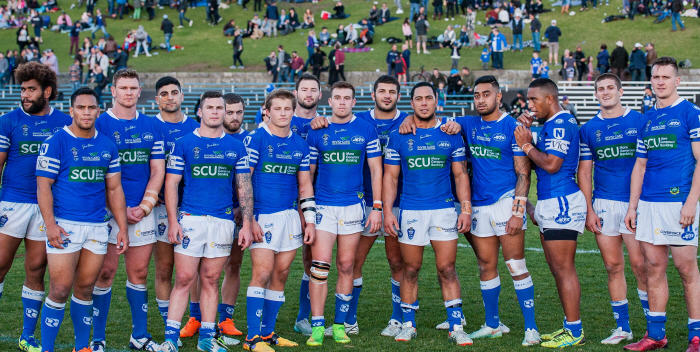 Kurt Kara and most of his Newtown Jets team-mates at the completion of his 100th NSW Cup match with Newtown RLFC. Photo by Mario Facchini Photography

Jets left to ponder the cost of missed scoring chances

Report on the 18th Round VB NSW Cup match between Newtown and Canterbury-Bankstown, played at Henson Park on Saturday, 11th July 2015 by Glen ‘Bumper’ Dwyer.

Newtown’s NSW Cup finals quest became somewhat harder after the Jets lost 30-26 to Canterbury-Bankstown at Henson Park last Saturday. This was a high standard and hard-fought match, and no doubt the quality of the play and the big Henson Park crowd would have impressed the NSW Rugby League CEO, David Trodden, who was watching from the grandstand.

The Bulldogs were first to score through an accurate cut-out pass and a bad defensive read by the Jets. This try was converted from the sideline and the eventual points difference in this local derby was down to goal kicking. Newtown hooker Pat Politoni and five-eighth Gerard McCallum were involved in sending backrower Junior Roqica away on an exhilarating forty-metre sprint to the tryline in the 23rd minute. Nathan Gardner’s conversion made the scores 6-all. The Jets were quickly back on the offensive and a well-weighted grubber kick by Todd Murphy was seized upon by second-rower Sami Sauiluma to put Newtown ahead 10-6. The Bulldogs took advantage of a penalty to work play downfield and to score a converted try barely a minute out from halftime.

Jets coach Greg Matterson told his players at halftime that they were playing formidable and well-drilled opponents, but the Jets had the attacking firepower to exploit the Bulldogs defensive weaknesses. Canterbury’s second phase play and attacking potential out wide presented dangers to the Jets.

Misfortune dogged Newtown in the second half, with fullback Nathan Gardner injured in what looked like a crusher tackle early in the second half, and experienced forward Tinirau Arona forced off the field after a bad head knock in the 60th minute. The Bulldogs increased their lead to 18-10 by way of a converted try in the 48th minute. The Jets threw everything into their attack and Gerard McCallum scored near the northern posts on the end of another well-execute grubber kick from halfback Murphy. Both sides went close to scoring in the next fifteen minutes and the game was right in the balance. The Jets were left rueing their missed scoring opportunities in this vital period of play.

The Dogs looked to have sealed the result with two breakaway converted tries against Newtown’s left-side defence but the Jets still had some fight left in them. A midfield break in the 75th minute ended in a clever unconverted try to Gerard McCallum, and three minutes later half-back Murphy scored from a well-crafted kick into the in-goal by McCallum. Murphy’s conversion gave the Jets the chance of a last-gasp victory but the time clock wasn’t on Newtown’s side.

Coach Matterson noted that Newtown’s missed opportunities midway through the second half had proved costly. The game had been there to be won and there were no excuses, other than the disruption caused by the injuries to Gardner and Arona. The Bulldogs brought with them a tough and uncompromising club culture that showed through in this fiercely-contested struggle between two finals’ aspirants.

Centre Blake Ayshford and backrower Junior Roqica were two of Newtown’s best players on the day. The Jets travel to Canberra in Round 19 to play Mounties (the Raiders NSW Cup partnership club) at GIO Stadium on Saturday, 18th July at 12.40pm. This match will be televised live on Fox Sports One.