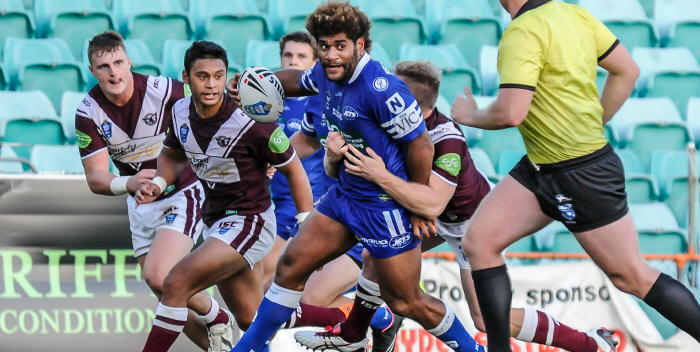 Jets made to earn their win against Sea Eagles

Manly-Warringah played Newtown in a “home game” at Leichhardt Oval on Saturday evening, after this NSW Cup fixture had been switched from the original venue of Brookvale Oval. The Jets had to pull out all stops in winning 32-26, after conceding significant leads to the Sea Eagles in both halves. The Jets had led 4-0 after five minutes but Manly scored three quick tries to take a 16-4 lead. Newtown pulled back through two converted tries to tie the scores up at 16-all at halftime.

Newtown began impressively and dominated possession in the early minutes, with winger Mitch Brown accepting a good pass from centre Sami Sauiluma and scoring in the left-side southern corner. Once Manly gained a bit of extended time in possession they soon found weaknesses in Newtown’s midfield defence, as the Sea Eagles put on three tries within eight minutes to lead 16-4 at the 23rd minute mark. The Jets regained some momentum and Mitch Brown scored his second try when he won the race to touch down halfback Todd Murphy’s grubber-kick into Manly’s in-goal. Brown nearly claimed his third try minutes later but was held up over the line. Centre Blake Ayshford (who was one of Newtown’s best players on the day) and second-rower Junior Roqica combined cleverly in the 34th minute to send fullback Nesiasi Mataitonga in near the southern end goal-posts, with Murphy’s second conversion making the scores 16-all at the break.

The Sea Eagles had the better of the game’s third quarter and made good use of Jets errors to score two more tries and take a 26-16 lead. Newtown five-eighth Dallas Wells defused a dangerous situation in the 60th minute when he knocked the ball from the grasp of a Manly player who had made a clean break up the middle of the field. Todd Murphy scored for Newtown in the next set and converted his own try for the Jets to trail 26-22. Blake Ayshford made a determined run in the 70th minute, fed the ball to hooker Kurt Kara who was run down by the frantic Sea Eagles defence. Winger Jacob Gagan then scored from the play the ball and Murphy converted for Newtown to take a 28-26 lead. Five minutes from fulltime the Jets scored the try of the match, when Mataitonga, Roqica and Murphy were all involved in a passing movement that ended in a try to Dallas Wells. Newtown defended this 32-26 lead until fulltime.

Jets coach Greg Matterson acknowledged that Manly had provided very willing opposition and had made a great contest of this game. The Sea Eagles had pulled clear in both halves and went very close to setting up what could have been a match-winning lead midway through the second half. Matterson noted that in upcoming games the Jets would need to establish more authority in the ruck area and show more commitment in defence against opponents from higher up the table.

The Jets coaching staff rated Blake Ayshford, Dallas Wells, Todd Murphy, Jacob Gagan and Mitch Brown as being the best of the backs. While there needed to be improvement in the Newtown forwards, Kurt Dillon and Ray Moujalli had been judged as the best on Saturday.

The Newtown Jets are back at home in the fifth round of the NSW Cup this Saturday (4th April), when the Jets take on Wentworthville at Henson Park at 3.00pm.