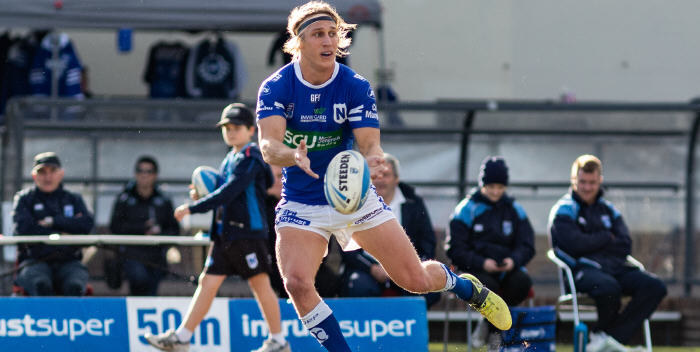 Newtown Jets halfback Jesse Marschke played very effectively against the Newcastle Knights on Saturday, and has been rewarded by being selected in the Intrust Super Premiership Round 17 Team of the Week. Photo: Mario Facchini, mafphotography

Here is the link to the weekend’s results and the updated ISP NSW competition ladder:  http://live.nswrl.com.au/comp/413e134259bc4ebcf

Newtown has now moved into fourth place on the competition table following losses by the New Zealand Warriors and St George-Illawarra.

The Newtown RLFC is well represented in the NSWRL Intrust Super Premiership NSW Round 17 Team of the Week: https://www.nswrl.com.au/news/2018/07/09/isp-team-of-the-week–rd-17/

Here’s the NSWRL’s match report of the game:

And here are the match statistics (compiled by the NSWRL) of the Newtown-Knights ISP NSW fixture:  https://www.nswrl.com.au/siteassets/competitions/intrust-super-premiership-nsw/2018/stats-reports/rd17-jetsknights.pdf

The penalties favoured Newtown 15-6 overall, with the count in Newtown’s favour by 10-2 in the first half, and by 5-4 in the second half. There was an extended period in the game where Newtown received an unbroken run of 12 penalties to nil. Knights coach Rory Kostjasyn, who played for Newtown between 2006 and 2008, was moved to remark slightly ruefully after the game that he didn’t recall ever getting a run of penalties like that in the days when he played for the Jets!

This game is being televised live on the Fox League Channel (502).

The match is being broadcast live on Steele Sports (www.steelesports.com.au) and through Twitter on @newtownrlfc

It is also the deciding match in the 2018 Frank Hyde Shield series. (Newtown and North Sydney drew 22-all at Henson Park on the 5th May).