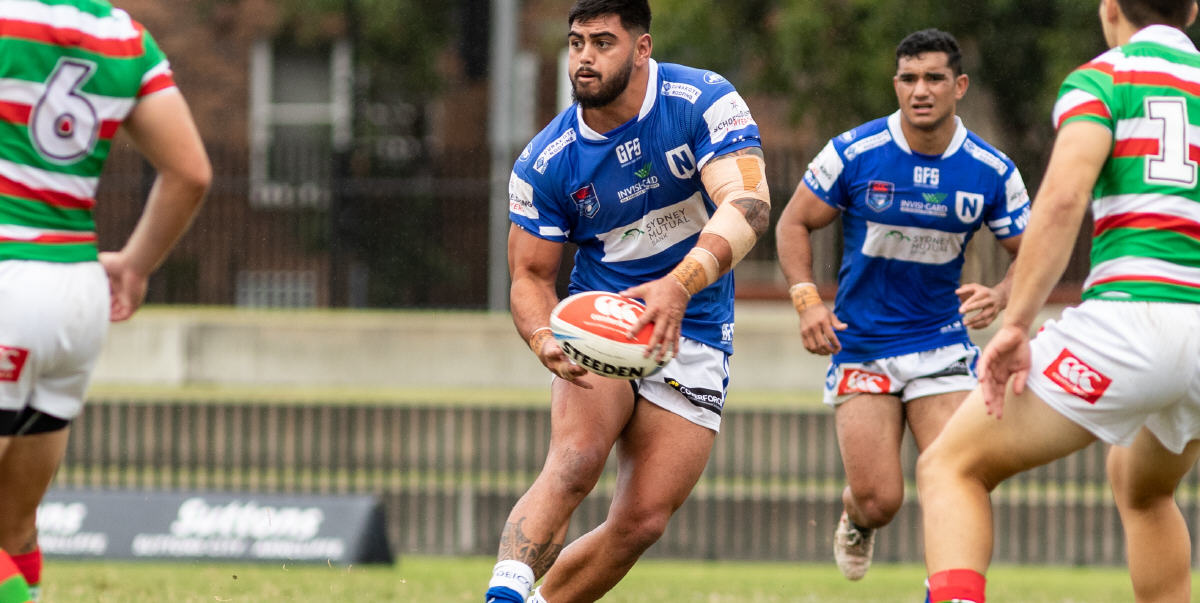 Newtown Jets front-rower Royce Hunt (formerly with Mounties and the Canberra Raiders) looks to pass to a team-mate in the match against South Sydney. Jets fullback Tyla Tamou is in the background. Photo: Mario Facchini, mafphotography

Jets make an impressive start to the 2020 season

South Sydney opened the scoring with a converted try in the fourth minute and the Rabbitohs then dominated possession and territory for most of the first quarter.

The Jets took decisive control in the game’s second quarter with tries to Royce Hunt in the 19th minute, Addison Demetriou (29th minute), Jackson Ferris (33rd minute) and the powerhouse Kayleb Milne on the stroke of halftime. Braydon Trindall converted all four tries for Newtown to take a commanding 24-6 lead into the break.

Braydon Trindall converted Wilton’s try and added a penalty goal in the 69th minute, enabling Newtown to run out comfortable winners by 32-12.

Coach Greg Matterson praised his players in his post-match remarks, noting that this was Newtown’s first opening round win in several seasons. Matterson had made it clear to his pre-season squad that a slow start to the competition rounds (as in 2019) would not be countenanced.

He also praised those players on duty on Sunday who had played in one or both of Newtown’s 2019 finals victories – Jackson Ferris, Billy Magoulias (who reprised another of his miracle kicks yesterday), Braydon Trindall, Jayson Bukuya, Teig Wilton, Siosifa Talakai, Wes Lolo and Daniel Vasquez.

Newtown’s second round match is against Canterbury-Bankstown next Saturday, 21st March at Belmore Sports Ground at 3.30pm.