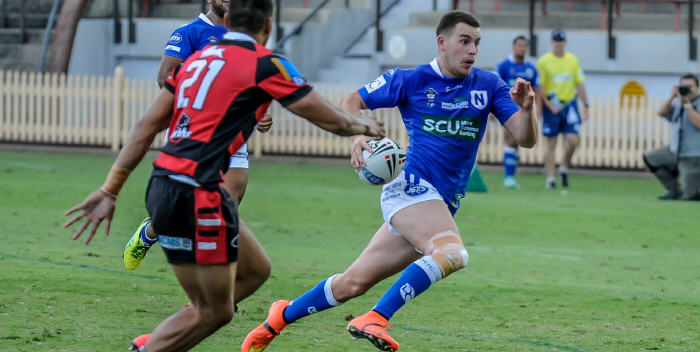 Jets make it four wins in a row

The Newtown Jets have taken out the first leg of the Frank Hyde Shield series, the trophy that is contested on an annual basis between the Newtown and North Sydney clubs. The Jets fielded a very strong side on Sunday, with 13 of their 17 squad members having had NRL or Super League playing experience. Newtown led the Bears 16-0 at halftime and went on to win this 6th round NSW Cup fixture at North Sydney Oval by 40-18.

The match was distinguished by the fact that this was Newtown front-rower Ray Moujalli’s 100th NSW Cup game in the Jets’ royal blue colours. The big Lebanese international has actually played a total of more than 200 NSW Cup games in a long playing career that has included stints at several other clubs. It was also a career milestone for the Cook Islands World Cup representative Tinirau Arona, who played his 51st NSW Cup match for the Jets on Sunday.

The Jets were first to score in this 1908 Foundation Clubs’ derby game, when fullback Nathan Gardner cut through to score in the 8th minute. The Bears kept Newtown at bay until the 23rd minute when the in-form five-eighth Dallas Wells raced over at the famous Fig Tree end of the ground, with Gardner converting this try. Wells nearly scored again in the 29th minute when he showed blistering speed up the left-hand sideline only to be tackled out a metre short of scoring by a determined Norths defender. Norths then applied pressure on Newtown at the scoreboard-end and went very close to scoring on two occasions. Three minutes out from halftime, Gardner broke through the Bears defence from inside his own quarter and sent Wells clear on a 70 metre dash for his second try.

The Jets nearly added two more tries early in the second half with the Bears twice holding Newtown attackers up over the try-line. The Fijian international Junior Roqica ran a clever line and broke through to score for the Jets with Gardner adding the extras. Halfback Todd Murphy contributed to Newtown’s try tally in the 59th minute, but the Bears hit back with two converted tries in quick succession. A good passing movement on Newtown’s left side saw winger Mitch Brown cross in the 69th minute, and Gardner converted from the wide out. The Bears responded with their third converted try five minutes out from fulltime, but another line break by the livewire Gardner saw Todd Murphy score under the posts in the 39th minute. Ray Moujalli provided a splendid touch to his 100th NSW Cup game by converting Murphy’s second try, which was the popular front-rower’s first-ever goal in senior Rugby League.

Jets coach Greg Matterson and his staff were pleased with the fourth successive win but felt there was a lot of room for improvement in Newtown’s performance. This was a strong Jets team that should have finished off more scoring opportunities, especially in the first half, as well as restricting Norths’ scoring chances. A leg injury to powerful centre Sami Sauiluma was of concern to the Jets’ staff.

The Jets are back at home at Henson Park this Saturday, 18th April, in what shapes up as a dream NSW Cup promotion. The Newtown Jets are coming off four successive wins and the visiting Mounties (the Canberra Raiders NSW Cup partnership club) visit Henson Park as the undefeated competition leaders. This much-awaited encounter kicks off at 3.00pm. Next Saturday is also a designated Family Fun Day at Henson Park, with stacks of free entertainment laid on for all the kids.