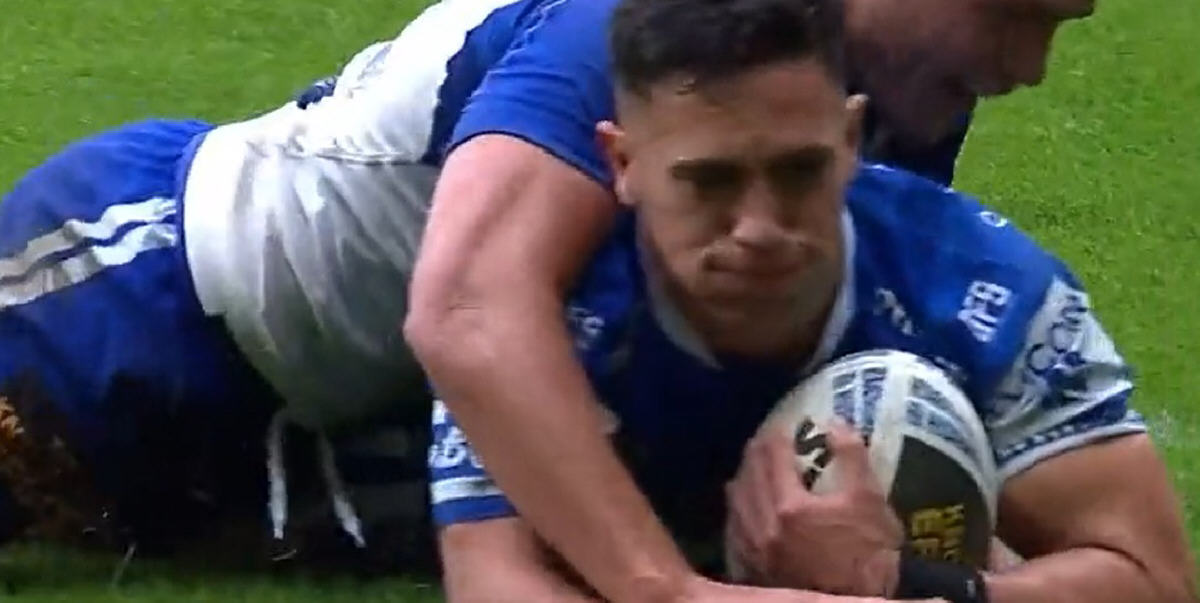 The Newtown Jets won a vital top four NSW Cup showdown against Canterbury-Bankstown on Saturday, a win that has propelled the Jets into clear second position on the Knock-On Effect NSW Cup competition table.

The match was played at CommBank Stadium, Parramatta as a curtain-raiser to the Canterbury Bulldogs v Cronulla Sharks NRL fixture.

Heavy rain fell throughout much of the game and not surprisingly the handling of both teams deteriorated somewhat in the latter part of the second half.

Newtown turned on a rousing second half performance, running out 28-16 winners after having trailed 16-12 at halftime. The Jets’ strong defence and dominance of possession in the second half contained the Bulldogs to scoring less than twenty points in a game for the first time in several weeks.

Newtown’s first half tries were scored by centre Kayal Iro (running off well-directed passes from Billy Magoulias and Jayden Berrell), and the second by front-rower Caleb Uele, who also so benefited from another good pass from Berrell.

The Jets had slightly the better of the first half, with the Bulldogs third try receiving the benefit of a questionable decision.

Newtown dominated possession and field position in the second half, with the Bulldogs beset by handling errors in the slippery playing conditions.

The Jets fifth and final try resulted from a well-worked set play from the scrum-base involving Berrell, Kade Dykes, Trindall and Hiroti, with the latter player cutting back through the grain of the Bulldogs defensive line to score.

With rain falling heavily in the final twenty minutes, the Bulldogs handling errors limited their efforts to overhaul Newtown’s lead.

Trindall added a penalty goal in the 66th minute that completed Newtown’s scoring for the match.

Braydon Trindall had an excellent all-round match, combining a kicking game that deployed short, long and high kicks along with a display of crafty passing.

This was one of Newtown’s better performances of the 2022 season and every player made worthwhile contributions to this valuable victory.

The win put Newtown back into second place on the competition table, with the top four now reading as: Penrith 24 points; Newtown 23; and Canterbury and Norths both on 22.

Newtown’s next match is against Mounties on Saturday, 9th July at the Aubrey Keech Reserve, Hinchinbrook at 3.00pm.

Weather: 14 degrees, heavy rain throughout most of the game.

Newtown Jets kicked off to the southern end of CommBank Stadium.

Braydon Trindall kicks a 40/20 in the 6th minute

26th minute: Bulldogs lose the ball at their end; Caleb Uele crashes over to the left of the goal-posts in the next set
27th minute: Braydon Trindall converts; Newtown 12-4.

Fox League Commentators make note of the expansive ball-play by both teams despite the wet conditions.

Tyler Slade left the field for a HIA. Ended up staying off the field with a knee injury.

TV commentary team noted that this was a high-quality NSW Cup match despite the difficult conditions.

Both teams had scored from errors made by their opponents at their own end of the field.

The ball was kept alive. Great dummy-half dash by Jayden Berrell puts Trindall over to score near the southern-end goal posts.

Bulldogs had originally lost the ball from a high kick.

Try was not converted. 16-all after 48 minutes.

51st minute: Jets move the ball through several pairs of hands for Tyla Tamou to score in the south-eastern corner.

Commentators praise the Wanganui-born Tamou for his versatility and great service to the Newtown club.

Try not converted by Trindall. Newtown leads 20-16 in the 52nd minute.

Rain continued to fall heavily in the second half.

58th minute: Mawene Hiroti steps past defenders to score to the right of the posts.

Jets make a handling error at their own end in the pouring rain.

Dogs get the ball back from the kick-off from another doubtful refereeing decision.

Commentators note that there have been only four penalties awarded in the game (at the 72nd minute mark).

Commentators note that Lachlan Miller has made 17 carries and has run 145 metres.

The work-rate and metres gained by Jesse Colquhoun are commented by Fox League’s Mark Carroll.
Bulldogs have been held scoreless in the second half; Newtown has pinned them in their own half for much of the second half.