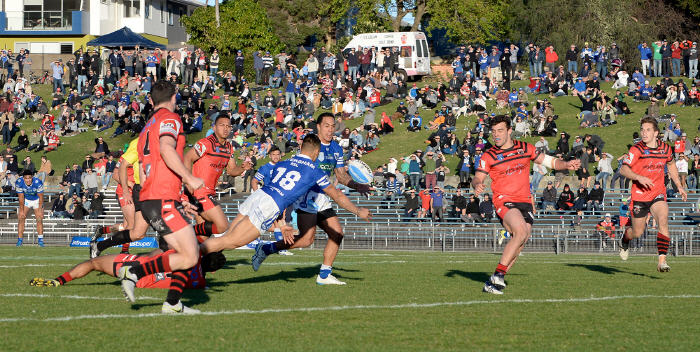 Newtown’s Arana Taumata (number 18) gets his pass away to Jets team-mate Kurt Kara with plenty of North Sydney Bears traffic around them, and the famed Henson Park hill in the background. Photo: Michael Magee Photography

Jets move into top four with narrow win against Norths

Report on the 24th Round ISP NSW match between Newtown and North Sydney, played at Henson Park on Saturday, 20th August 2016 by Glen ‘Bumper’ Dwyer.

The Newtown Jets featured in yet another nerve-wracking Intrust Super Premiership finish, but this time they claimed the competition points. The Jets defeated North Sydney 16-12 at Henson Park last Saturday, after the Bears had led 6-4 at half-time. The match was also the decider in the annual Frank Hyde Shield series contested by the two 1908 foundation clubs. Several members of Frank Hyde’s family were on hand to present the trophy to the victorious Jets.

Winning this match was important for both clubs, with the Jets aiming at a top four finish and the Bears fighting for a place in the ISP NSW top eight. Norths showed more grit and determination in the first half, kicking a penalty goal in the 14th minute and then scoring an unconverted try five minutes later. The Jets didn’t get on to the score-board until three minutes from half-time when five-eighth Josh Cleeland scored a determined try to the right of the northern end goal posts. The try wasn’t converted and Norths led 6-4 at the break, despite Newtown having had the advantage of a brisk southerly breeze and more possession and field position than the Bears.

Jets coach Greg Matterson made it abundantly clear to his players at half-time that this win had to be earned and he demanded bigger contributions from some of his key men and play-makers.

Norths increased their lead to 10-4 at the 52nd minute mark and the Jets now had their work cut out to retrieve this result. Josh Cleeland grubber kicked into the Bears’ in-goal in the 59th minute and strong winger Jacob Gagan did really well under pressure to secure the ball and ground it safely for a critical try. Halfback Fa’amanu Brown converted from wide out and kicking into the wind to tie the scores up at 10-all.

The last twenty minutes of the game were extremely tense and kept the big crowd fully engaged. Newtown edged ahead 12-10 through a 70th minute penalty goal, but the Bears responded in kind four minutes later and it was 12-all. Norths missed two field-goal attempts in the last five minutes, one of which shaved the left-hand upright. With one last supreme effort the Jets worked the ball downfield, and Gagan scored his second try when he won the race to ground Arana Taumata’s grubber-kick inside Norths in-goal in the 79th minute.

Coach Matterson noted that the bigger Jets forwards had been dominated in the rucks for most of the game, and that Norths had been successful in slowing down Newtown’s play the balls. Despite the Jets’ surplus of possession there hadn’t been much variety in attack to prise open the Bears’ defence. Jacob Gagan was the man of the match with his two well-taken tries and strong relieving runs from his own end of the field.

Next Saturday, 27th August, is a big day on the Newtown Jets calendar with the annual club reunion being held at Henson Park. The Jets host Manly-Warringah in the final round of the ISP NSW competition, with this 25th round fixture timed to kick off at 3.00pm.