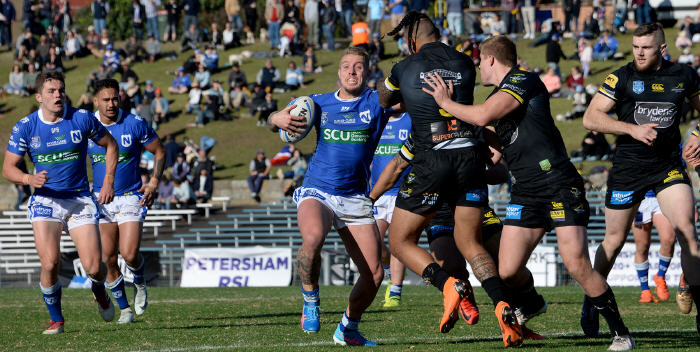 Newtown centre Aaron Gray (with the ball) was one of the Jets’ best backs at Henson Park last Saturday. Photo: Michael Magee Photography

The Newtown Jets were beaten 22-16 by the competition leaders Mounties at Henson Park on Saturday, but only after the Jets had staged a thrilling second half fightback.

The outlook was grim for the Jets when Mounties led 22-0 after scoring four unanswered tries in the first thirty minutes. The Canberra Raiders partnership club had a near-monopoly of possession for most of the first half and Newtown rarely threatened the Mounties tryline. Winger Bessie Aufaga-Toomaga scored just before halftime on the end of a well-executed backline movement, and the Jets went in to the halftime break 22-4 in arrears.

There were no points scored by either side in the third quarter of the game but the Jets looked more cohesive and competitive. They eventually broke through for tries to Billy Magoulias and Matt Evans, which with two conversions by Kyle Flanagan had Newtown back in the game trailing 22-16. Front-rower Braden Uele was across the line in the 68th minute but a Mounties player’s outsize boot prevented the ball being grounded. The Jets showed remarkable flair and creativity in nearly turning on “the try of the century” in the last minute of play, but an errant foot on the inside-edge of the sideline stripe put paid to this exhilarating passing rush.

Versatile Billy Magoulias was one of Newtown’s best, while other players who had strong moments included Kurt Dillon, Braden Uele, Scott Sorensen, Anthony Moraitis, Aaron Gray and Will Kennedy.

There is a general bye in the Intrust Super Premiership competition next weekend, and then the Newtown Jets are back at Henson Park on Saturday, 30th June versus Wentworthville at 1.00pm.

This game was televised live on Channel Nine and broadcast live by Steele Sports.

Newtown’s Ron Massey Cup partnership club, the Glebe Dirty Reds (aka Glebe-Burwood Wolves), showed commendable fighting spirit in their match against Mounties at Henson Park on Saturday. The Dirty Reds trailed 16-0 at halftime and stormed home to an exciting 18-16 win. It was an against-the-odds victory straight out of the hallowed annals of this old foundation club. The Dirty Reds return to Henson Park on Saturday, 30th June.