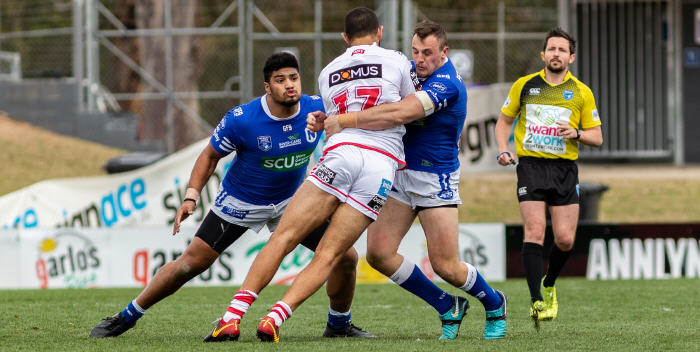 The Newtown Jets were narrowly beaten 28-26 by St George-Illawarra in the Intrust Super Premiership Qualifying Final played at Panthers Stadium on Sunday afternoon.

The teams were locked together 16-all at halftime, with Newtown’s three tries being scored by winger Matt Evans (2) and second-rower Briton Nikora.

Jets in-form five-eighth Jack A. Williams left the field early in the second half with a leg injury, and Matt Evans was also forced from the field just minutes later.

The Dragons kicked a penalty goal soon after half-time but Newtown struck back with well-constructed tries to centre Reubenn Rennie and fullback Will Kennedy. The Jets led 26-18 with 12 minutes left to play, but critical handling errors and missed tackles at the back end of the game proved costly.

St George-Illawarra pulled back to trail 26-24 seven minutes out from fulltime, and then were awarded a most controversial try in the 77th minute that gave them a two-point lead.

Forwards Briton Nikora, Jimmy Jolliffe and Blayke Brailey were rated as being three of Newtown’s best players on the day.

The Jets must now regroup and get ready for next Saturday’s elimination semi-final against Mounties.

Here are the details for next Saturday’s match: