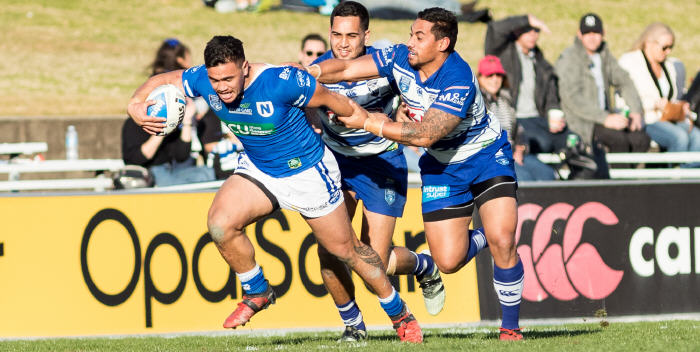 Hard-running Newtown centre Reubenn Rennie (with the ball) is proving to be a very useful mid-season signing for the Jets. Photo: Mario Facchini (MAF Photography)

The Canterbury Bulldogs staked their claim as one of the in-form teams of the Intrust Super Premiership, after handing out a 54-26 belting to the Newtown Jets at Belmore Sports Ground on Saturday.

The scores were 6-all after thirty minutes, but the Bulldogs took advantage of two Jets defensive lapses to lead 18-6 at halftime. Canterbury maintained their dominance early in the second half as they raced away to a 36-6 lead. Newtown then scored three tries to pull the margin back to 36-20, but this was never going to be the day for a miraculous fightback by the Jets.

Newtown coach Greg Matterson described his team’s performance as very disappointing when they knew they had so much to play for. Despite this loss, the Jets can still qualify for the finals but they face a difficult run home. Matterson said there had been too many missed tackles, and that his team was blown away when the Bulldogs scored five unanswered converted tries in a twenty-minute period before and after the halftime break.

Reubenn Rennie, the former Canterbury and Canberra Raiders centre, had a strong game for Newtown and ran with great determination. Jets halfback Luke Towers provided some attacking flair in the second half, and five-eighth Joseph Paulo created three tries with cleverly-weighted grubber kicks into the Bulldogs in-goal zone.

The Newtown Jets are back at Henson Park next Saturday, 12th August, when they play the Penrith Panthers at 3.00pm.