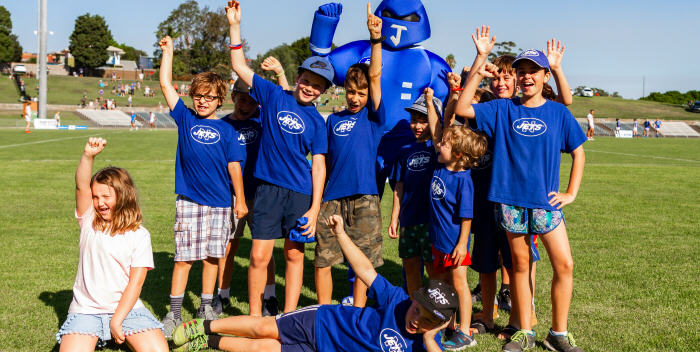 This group of children from Wilkins Public School enjoyed their visit to Henson Park on Saturday afternoon, as well as being entertained by Newtown’s club mascot Jetman. Photo: Mario Facchini (MAF Photography)

Jets pay the price for a sub-standard second half

The Newtown Jets led 10-8 at halftime against St George Illawarra in the fifth round Intrust Super Premiership rugby league match played at Henson Park on Saturday. Newtown then turned in a below par second half performance that saw the Dragons prevail by 18-10. The Jets had beaten the Dragons three weeks ago at Southern Cross Group Stadium, but on Saturday the Red Vee boys took full advantage of their second half dominance of possession and field position.

Newtown looked impressive in the first thirty minutes of the game and led 10-0 through tries to centre Aaron Gray and halfback Kyle Flanagan. The pendulum swung when the Dragons scored in the 33rd minute from a cross-field kick into the south-west corner, and then added another try in contentious circumstances right on halftime.

St George Illawarra had more than sixty per cent of possession in the second half and the Jets displayed very little guile with what ball they had. The Dragons added two more tries, one from another well-judged kick into the north-east corner and the final try coming from a long-distance effort after the Jets defenders thought the referee was about to stop play. The unseasonably warm conditions also added to the Jets’ difficulties in the second forty minutes.

Newtown’s best players were hooker Blayke Brailey in the forwards and Aaron Gray, Kyle Flanagan and Edrick Lee in the backs.

The Jets travel to the Lower Hunter region next Saturday, 14th April, when they will play the Newcastle Knights at the Cessnock Sports Complex at 3.00pm.

Congratulations to our Ron Massey Cup partnership club Glebe-Burwood, who have won their opening competition round today (Sunday, 8th April)against Blacktown Workers by 26-12.

This was a tough assignment in savage Western Sydney heat (32 degrees) at the HE Laybutt Sports Complex, Arndell Park.

Our man on the ground out west Wayne Leong advises that the penalties in the first half went Blacktown’s way 8-1 and that Glebe completed one out of seven sets!

Despite this virtual shut-out of possession the Glebe-Burwood boys hung tough and kicked home late in the second half for a splendid morale-boosting victory.

Giant winger Charlton Schaafhausen (formerly with Western Suburbs and now a Newtown Jets-contracted player) was named as Glebe-Burwood’s man of the match.