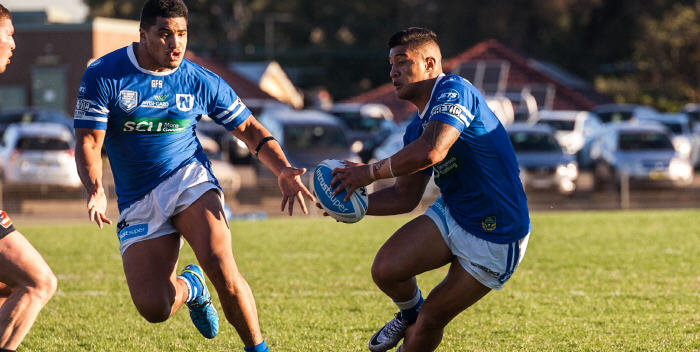 Report on the 10th round ISP NSW match between Newtown and Mounties, played at Henson Park on Saturday, 14th May 2016 by Glen ‘Bumper’ Dwyer.

A big crowd at Henson Park on Saturday saw an absorbing showdown between the two Intrust Super Premiership (ISP) front-runners, Mounties and the Newtown Jets. The boys in blue were left to regret their missed scoring opportunities in the first half as the Canberra Raiders partnership club held on for a narrow 18-12 win. Both teams made a lot of errors but also turned in determined, almost brutal defensive efforts.

The Jets put plenty of pressure on the visitors early in the game but handling and passing errors took the edge off their attacking play. Five-eighth Josh Cleeland stepped his way through the Mounties defence in the 17th minute and halfback Fa’amanu Brown converted the try. Newtown failed to take advantage of a couple of scoring opportunities midway through the first half which would prove costly. The Jets then made a handling error at their end which Mounties capitalised on, scoring a converted try in the 34th minute. Mounties added another six points three minutes later when they scored from a ricocheting grubber kick right on Newtown’s try-line. The Jets trailed 12-6 at halftime but they had created the most scoring opportunities in the first forty minutes.

The second half was a gripping encounter between the ISP heavyweights, and despite the errors and ineffective kicking tactics, there was a grim intensity that kept the big crowd fully engaged. Jets hooker and captain Matt McIlwrick crossed the line early in the second half but was held up by frantic defenders. The Mounties line speed and tough tackling kept the Jets contained, and Newtown coach Greg Matterson sent the message out for his players to adopt a more expansive style and “to start playing a bit of footy”.

Five-eighth Josh Cleeland hurled himself at the line with ten minutes remaining, but referee Jeff Hartup claimed that he hadn’t grounded the ball. Minutes later the referee controversially ruled a shepherd against a Jets ball-carrier, and Mounties added a penalty goal to create an eight-point buffer. Newtown launched an all-out attack down their left side but an audacious intercept by the Mounties winger ended in a 90 metres runaway try. The non-stop Cleeland snapped up a bouncing grubber kick in the last minute to score his second try, and Fa’amanu Brown’s conversion made the full-time score 18-12.

For Newtown, second-rower Kurt Capewell and five-eighth Josh Cleeland were the standout performers and these former Ipswich Jets players are winning a lot of fans amongst the Henson Park army. All of the Newtown forwards worked hard in defence, with Mounties only scoring the one try where the Jets defensive line was breached through ball play. Big Malakai Houma added a bit of sting to Newtown’s “go forward” when he came on from the bench. Centre Jordan Drew went very close to breaking through to score on a couple of occasions. Kurt Dillon suffered a thumb injury which might keep him sidelined for some weeks. Coach Matterson noted that in such a tight contest between two fairly evenly-matched teams, every scoring opportunity has to be maximised as there aren’t many second chances available.

The Jets travel away next Sunday, 22nd May, to the northern end of the Central Coast when they will take on Wyong at the Morrie Breen Oval at 3.00pm.