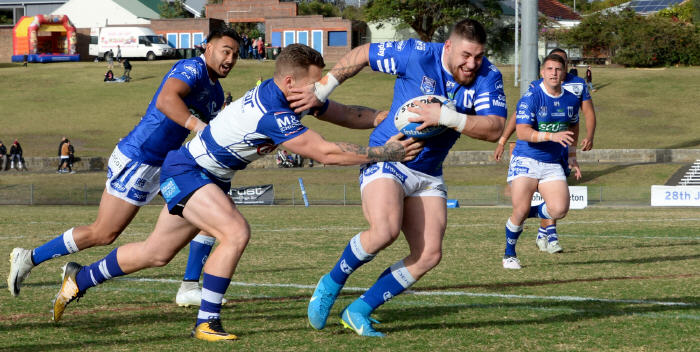 Powerhouse back-rower and centre Addison Demetriou (pictured with the ball) was a revelation in the 2018 rugby league season. Photo: Michael Magee Photography

Jets return to training as the 2019 rugby league season beckons

The Newtown Jets commenced their pre-season training program on Monday, 19th November. The Jets are beginning the first year of a five-year extension in their successful rugby league partnership with the Cronulla-Sutherland Sharks.

No doubt the Jets will be determined to put the disappointment of their narrow grand final loss to Canterbury-Bankstown behind them. Coach Greg Matterson, moving into his twelfth season as head coach of the Newtown club, says that his charges will be “looking to take off from where they left off at the end of last season”.

Matterson added that he is confident that the club is assembling a pool of players that will be capable of finishing one place better than the season just completed.

New signings with the Jets include lock forward Siosifa Talakai (ex-Souths, Penrith and Junior Kiwis), Chris Tupou (ex-Cronulla) and Luke Polselli (ex-Cronulla). The only confirmed departure from the club so far is centre Reubenn Rennie who has committed to a full-time pre-season program with the Canberra Raiders.

Changes to the consist of the Intrust Super Premiership NSW competition for 2019 include the return of the South Sydney Rabbitohs, with North Sydney entering into a five-year partnership with the Sydney Roosters. Wyong Roos have departed from the ISP NSW competition.