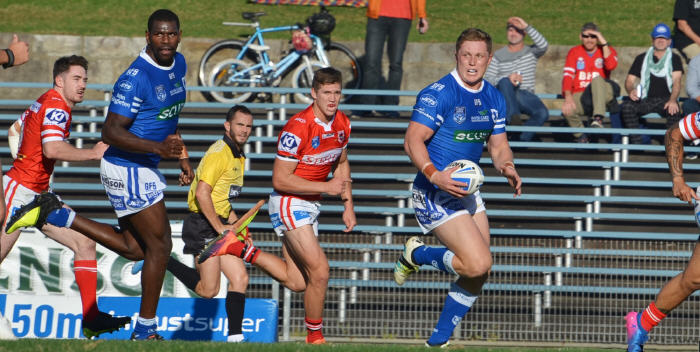 The Jets narrow loss to Illawarra on Saturday was a salutary lesson to Newtown’s young team in not allowing their opponents to get back into the game. The Jets led 22-6 midway through the first half, but this lead had narrowed to 22-16 by halftime. Illawarra only took the lead for the first time fifteen minutes out from fulltime but the Jets fought back tenaciously to trail 38-34 two minutes before the final siren.

This match was the third time this season that Newtown’s Intrust Super Premiership team had lost to a top five opponent by four points or less. The Jets paid for lapses late in the first half and during a crucial period of the second stanza. Illawarra are the defending premiers and their more experienced forward pack had the better of play for extended periods of the second half.

Newtown laid on some of the best tries of the game, with Junior Kangaroos centre Jesse Ramien scoring after Fa’amanu Brown had made a clever break and was backed up by Matt Evans. Winger James Tuitahi showed great strength in scoring his first try and his second came courtesy of a top-class cut-out pass from Daniel Mortimer. Winger Edrick Lee produced one of his trademark unconventional tries early in the second half, and he created another two minutes out from fulltime when he made good ground, chip-kicked over one defender’s head and caught the ball, then drew the Illawarra fullback and sent Manaia Cherrington racing in to score under the northern end goal-posts.

Coach Greg Matterson will be working doubly hard this week on team combinations and positional changes, as several Jets ISP NSW players are likely to be promoted into the Sharks NRL team to cover for State of Origin selections.

Next Saturday at Henson Park, 27th May, is the annual Salute the Hipsters Day, when the Jets pay tribute to the greatly-changed population of inner-west Sydney that has become such a loyal support base of the Newtown club. The Jets take on their nearest neighbours, Canterbury-Bankstown, on Saturday at Henson Park at 3.00pm.