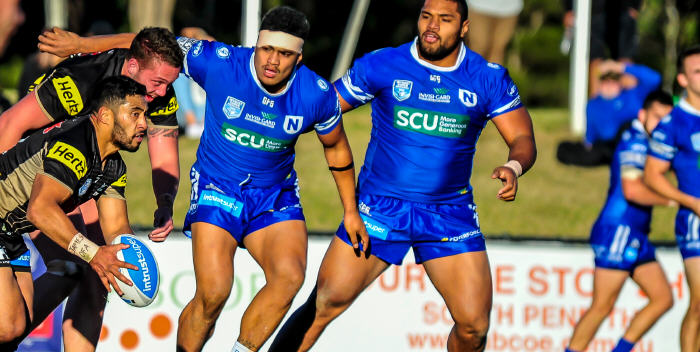 Even the presence of the formidable Houma brothers, Malakai (left) and Saulala, was not enough to stem the tide against a very strong Penrith Panthers team. Photo: Gary Sutherland Photography

Jets run into a perfect storm against the rampant Panthers

Newtown came into this game against Penrith with the best defensive record in the Intrust Super Premiership – but they took a fearful hammering from the Panthers to the tune of 60-6.

The Jets fielded a somewhat understrength line-up and then lost several key players with injury during the game, ending up with no replacements on their bench for the last 15 minutes.

Penrith kicked off, with Newtown defending the Leagues Club end of the ground.

Josh Cleeland made a break on the last tackle and then got his kick away.

Newtown ruled to have knocked on a Jamie Soward bomb

Penrith on the attack in Newtown’s 20 metre zone

Penrith knocks on from the kick-off

Newtown mount an attack inside Penrith’s 20 metre zone, but the ball goes over the sideline

Penrith makes big inroads in the next set, Newtown under pressure

Another penalty to the Panthers, and the Jets defence is under stress

Newtown knocks on in the next set; Penrith quickly on the attack

McIlwrick leaves the field for a concussion test

Another penalty to Penrith

Panthers are clearly winning the battle of the midfield

Things are looking very grim for the Jets

Greg Matterson tells his players to go back to the start; the second half starts at nil-all

Penalties had favoured Penrith 5-1 in the first half

Another penalty to the Panthers in the first minute, but they then lose the ball

Harawera-Naera scores his 3rd try, Panthers showing too much strength and power

Newtown is clearly down in confidence and they are handling poorly

52nd min: Another penalty to Penrith

Penalty count is 8-2 to Penrith

55th min: Another penalty to Penrith for stripping the ball

Kenny Niko is injured in the 56th min

Extended stoppage; Niko is stretchered off

Soward has been involved in virtually every try

Kurt Capewell is gone for the day

Penrith knock on and finally another penalty to Newtown

Josh Cleeland comes of with an ankle injury

No replacements left on the Jets bench

One Newtown supporter remarks that it would be virtually impossible for any other form of misfortune to come Newtown’s way!

Jets defending on their own line

73rd min: Jets lose the ball at their end and Penrith immediately put them under pressure

Penrith had the majority of possession

Starting to get dark at St Marys Stadium

The Panthers have won their fifth game on end, and today threw down the gauntlet to all of the other top six ISP NSW teams.

He told Hawksbury FM that everyone in the Penrith team did their own job well and the team reaped the rewards today.

He was very pleased that the Panthers had only conceded one try.

Newtown’s repeated errors and high penalty count compounded all of their on-field problems.

If you take things for granted in the Intrust Super Premiership NSW competition, this is what can happen.