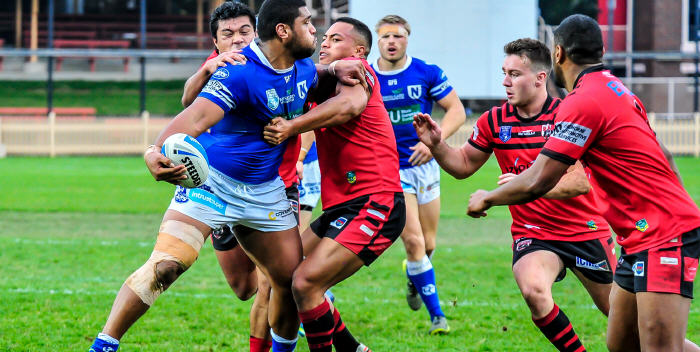 Report on the 19th round ISP NSW match between Newtown and North Sydney, played at North Sydney Oval on Sunday, 17th July 2016 by Glen ‘Bumper’ Dwyer.

Both the Newtown Jets and North Sydney Bears went into last Sunday’s Intrust Super Premiership match badly needing to win. The Jets were coming off three successive defeats and needed to win to stay within striking distance of the top four. The Bears were playing at home and wanted the competition points to ward off challengers from further down the competition table who were out to evict Norths from the top eight. For both of these old 1908 foundation clubs, there was the added incentive of going one-up in the annual Frank Hyde Shield series.

North Sydney certainly had the better of the first half and thrilled their home crowd with converted tries in the fifth and eleventh minutes as they took a 12-0 lead. The Bears were out-enthusing Newtown and the Jets never started to fire up until the first half was well advanced. Norths added a penalty goal in the 30th minute, but the Jets finally showed some form as Jordan Drew sent Matt Evans in to score close to the southern end goal-posts in the 37th minute. Kurt Capewell converted and Norths maintained this 14-6 lead into the half-time break.

Jets coach Greg Matterson was in full voice at half-time as he gave his players a blast, pointing out that the Bears appeared to be following Newtown’s own pre-match instructions perfectly. Matterson called on his players to respond and rise to the challenge, and to play themselves back into the game.

The Jets went on to turn in a very solid and focused second half performance, commanding the mid-field and clocking up a ninety-five per cent completion rate, along with only one dropped ball. Newtown added four tries, three conversions and two penalty goals and kept the Bears scoreless in the second half, as they ran out winners by 32-14. The Jets really only assured themselves of this win with two tries in the last five minutes, What probably was a game-changing incident occurred in the 54th minute, with Norths looking dangerous as they mounted an attack on their left-side thirty metres out from the Jets try-line. The skilful Kurt Capewell swooped and intercepted a Bears pass, and then deftly sent Mitch Brown racing away for a long distance try which gave Newtown the lead for the first time in the game.

Jets hooker Matt McIlwrick had a great game, topping off a tireless performance with two long-distance breaks from dummy-half that sent the Bears defence into scrambling mode. Kurt Capewell was outstanding, and big front-rower Saulala Houma is getting back to his best form. Josh Cleeland, Matt Evans and Mitch Brown were prominent, while the two young Sharks called up from the under 20’s, Jaimin Jolliffe and Lachlan Stein, impressed once again.

The tough assignments continue for the Newtown Jets when they travel to Leichhardt Oval on Saturday, 23rd July, to play Wests Tigers. The Jets are one point behind the fourth-placed Wests Tigers so there is no shortage of incentive linked with the result of the game. This 20th round ISP NSW match kicks off at 3.00pm.