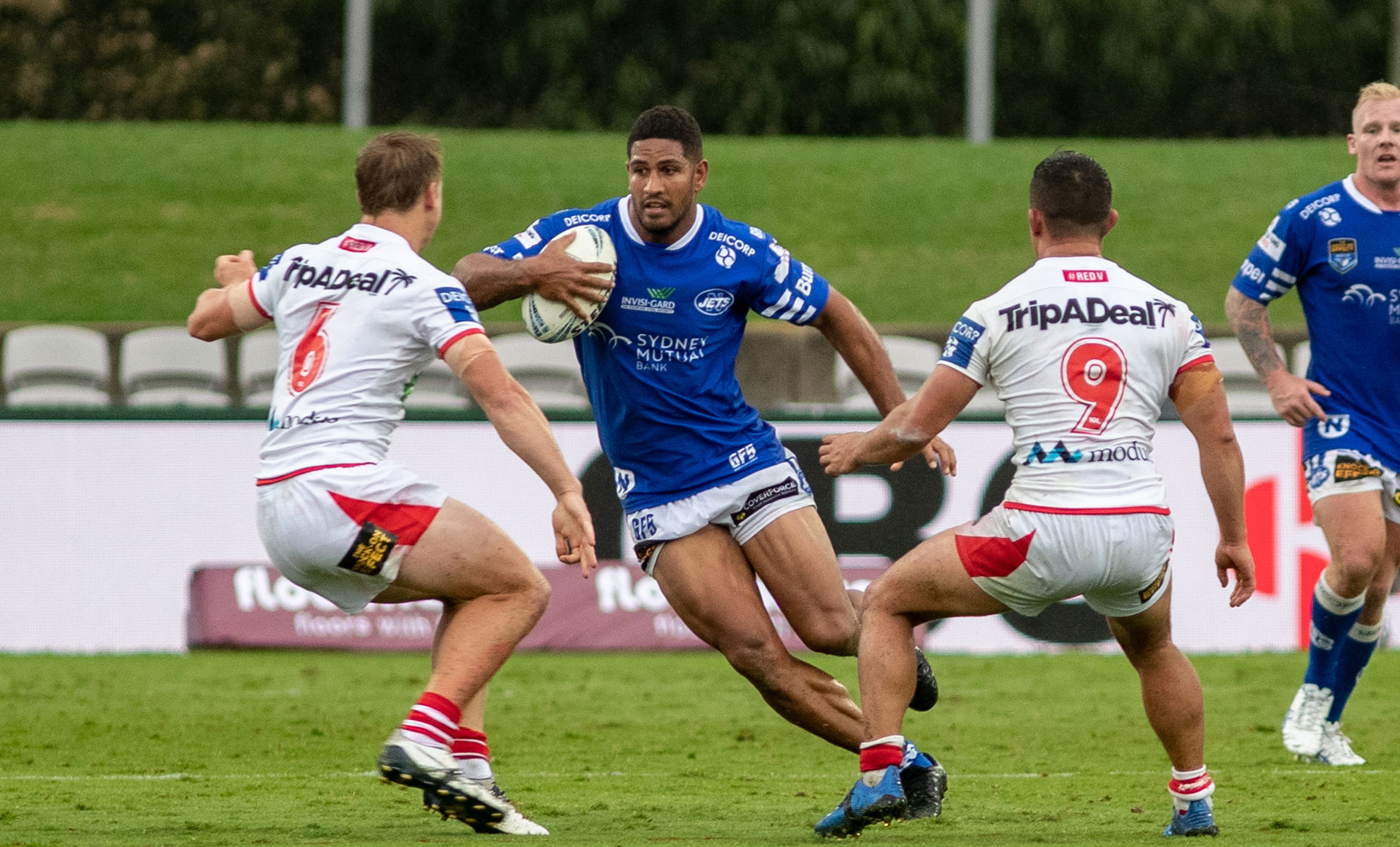 The Newtown Jets won a tough encounter with St George-Illawarra in the opening round of the newly-rebranded Knock-On Effect NSW Cup at Netstrata Jubilee Stadium, Kogarah on Sunday afternoon.

The Jets won 16-10 after the Dragons had led 6-4 at halftime. Steady rain fell throughout the game but the Jets’ high completion rate and good handling in the second half played a big part in their grinding win.

Newtown lost both centres to injury in the first half – Tyrone Phillips with an arm injury after 30 minutes and Jackson Ferris was forced off at halftime with an injured ankle. The loss of both centres led to some serious reshuffling of the Jets second half line-up, with backrowers moving into the backline and hooker Kyle Patterson into the halves.

Veteran international and long-serving NRL front-rower Andrew Fifita made his debut for the Newtown Jets, and he put in a solid performance on a day when it was a case of “all hands to the pumps” with regard to Newtown’s difficult situation.

Both teams scored tries in the third quarter and the scores were locked up at 10-all with just over twenty minutes left to play. The game might have been a dour struggle in the constant rain and slippery conditions, but the tied scores and the sheer intensity of this contest kept the crowd enthralled.

Wingers Nene Macdonald and Eddie Aiono deserve special mention for getting thoroughly involved in the forwards’ workload and for making a lot of valuable ground stepping through the tiring Dragons pack members.

Halfback Braydon Trindall set up a superb try for Eddie Aiono early in the second half by way of a master-class cut-out pass. Trindall slashed through the Dragons defence with a trademark “show and go” break for a try in the 73rd minute.

Coach Greg Matterson praised all of his players in the dressing-room after full-time, saying that this was one of the best and bravest first-round victories for the Jets since he had assumed the NSW Cup coaching position back in 2008.

Newtown has a short turnaround for their second round match, when they meet the Newcastle Knights at Central Coast Stadium, Gosford on Friday, 19th March at 3.45pm. This match is a curtain-raiser to the New Zealand Warriors-Newcastle Knights NRL fixture.