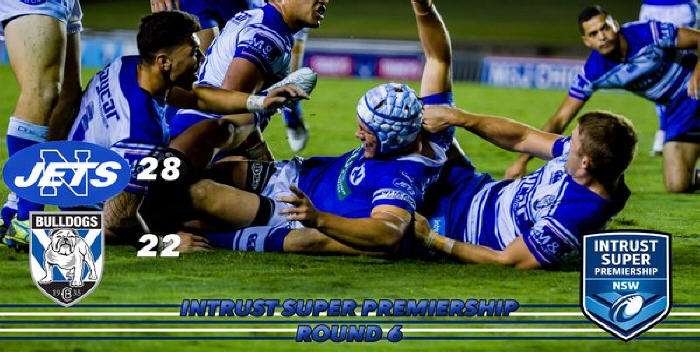 It might be a case of find the ball at Belmore Sports Ground on Friday night, but Josh Cleeland has scored for the Newtown Jets against the Canterbury Bulldogs. Photo: Mario Facchini Photography.

Details from the ISP NSW 6th round match between Canterbury-Bankstown and Newtown, played at Belmore Sports Ground on Friday, 8th April 2016.

(Jordan Drew and David Fifita had been late withdrawals from the Newtown Jets team).

The Canterbury-Bankstown Bulldogs team was:

This match report from Matt Buxton is on the NSWRL website: http://bit.ly/1URx4Ze

And this report on the Jets-Bulldogs ISP NSW match is on the Cronulla Sharks website: http://bit.ly/1qAUKEE

(This timeline of Friday’s game can be cross-referenced to www.twitter.com/newtownrlfc)

Bulldogs kicked off, running to the railway line (northern end)

3rd min: Bulldogs score from a grubber kick into the in-goal. Tyrone Phillips the try-scorer, converted by Brad Abbey. Bulldogs 6-0.

Josh Cleeland gets across the line in the 8th minute but can’t ground the ball.

Bulldogs get a penalty almost immediately to relieve the pressure.

Bulldogs willing to run the ball on the last tackle. They are putting on some big hits and look like they are fired up, looking for their first win.

Bulldogs lose the ball in the 11th minute.

13th min: Bulldogs concede a penalty 5 metres out from their own line.

This game is a great opportunity for Jaline Graham and Jason Schirnack to perform well against their former CB team-mates.

Jets go very close in 17th min with Josh Cleeland’s excellent kick into the right-hand southern corner unable to be gathered in by the fast-chasing Jacob Gagan.

Bulldogs get a penalty at Newtown’s end in the 18th min.

A bad period of the game for the Henson Park lads. Bulldogs score their third try when Bronson Garlick barges over under the posts in the 21st min.

Try converted by Brad Abbey and the Dogs lead 18-0 after 22 mins.

A midfield penalty to Jets in the 32nd min.

Jets forwards need to take note of their opponents’ straight and hard running.

A better set by the Jets in the 33rd min nearly ends in a try (Josh Cleeland narrowly misses grounding his own grubber kick into the in-goal).

Malakai Houma and Kurt Capewell looking effective in carrying the ball forward for the Jets in the 35th min.

Bulldogs overall looked to be winning the midfield wrestle and slowing Newtown’s play the ball speed down, giving the Dogs a decisive advantage

Josh Cleeland scores in the last 30 seconds of the first half. His try isn’t converted.

Coach Matterson gets a strong message across to the Newtown boys in the dressing-room at half-time. They are playing well below their capabilities – they had not been sharp in their last training session and they carried that mindset into the first half of this match.

Jacob Gagan scores from a high kick into the right-side northern corner and Fa’amanu Brown converts from the sideline. Bulldogs lead 18-10 after 44 mins.

A penalty to the Jets 40 m out from the CB try-line in the 45th min helps keep the pressure on the Dogs.

53rd min: Lucky break for Jets. Bulldogs knock on what had been an ineffectual short kick by Jets.

Converted again from the sideline by Fa’amanu Brown, Newtown now leads 22-18 after 59 mins

Fortunate call to Newtown in 65th min gave the Jets a scrum-feed 10m out from the Bulldogs line – but they turn it over in the next set!

Penalty to the Bulldogs in the 68th min at Newtown’s end.

Canterbury is playing for the game and are pushing their passes

74th min – Newtown scrum-feed at Bulldogs end. Cleeland breaks through to score to the right of the posts.

Kurt Capewell converts the try and the Jets look safe at 28-18 in the 76th min.

Bulldogs Tyrone Phillips breaks away to score in the right-side southern corner in the 79th min.

Jets kick off with 20 seconds on the clock and manage to confine the Bulldogs at their end.

Newtown had turned up for this game not switched on and the Bulldogs were very much in the right state of mind to spring an upset.

Other ISP NSW results from the ISP NSW 6th round played this weekend: