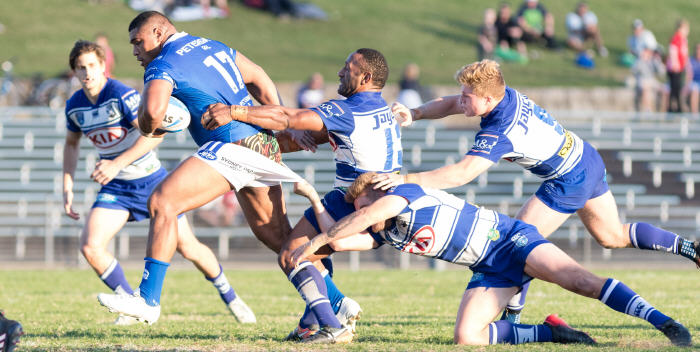 Big Saulala Houma’s vital try in the 72nd minute of Saturday’s drawn game against Canterbury-Bankstown brought back memories of the barnstorming try he scored against Illawarra in that never-to-be-forgotten Reunion Day match of 2012. Photo: MAF Photography

Jets stage a second half fightback to draw with the Bulldogs

Details of the Newtown-Canterbury ISP NSW 12th round match played at Henson Park on Saturday, 27th May 2017.

The match was broadcast live on: www.steelesports.com.au

Newtown kicked off to the southern end.

5th min: Penalty to Newtown 35 m out from their own tryline

8th min: Another penalty to Newtown, this time 10 m out from their own line

10th min: Jets move the ball at speed but Niko is tackled out over the sideline, 20 m out from Canterbury’s tryline

13th min: ‘Dogs trapped in their own in-goal and they take a goal-line drop-out

Both teams are getting attacking opportunities at their opponents end

In the next ruck, a CB pass goes forward

Jayden Walker has gone to the head-bin

They lose the ball cold when in a good attacking position

32nd min: Jets make a break, lose the ball and then give a penalty away 30 m out from ‘Dogs line

‘Dogs forwards starting to get the upper hand

33rd min: ‘Dogs lose the ball when in another good attacking position 10 m out from Newtown’s line

(The legendary Race Caller, Paul Clarke, was in full voice in front of the canteen block, calling on the Jets to perform the most unlikely on-field feats!)

37th min: Predictably the ‘Dogs score in the next set after several strong drives by the forwards

Rod Griffin the try-scorer; conv by Stanley CB 12-6 after 38 mins

‘Dogs mount an attack in the last minute and turn on their best movement of the half, scoring in the nth west corner with 30 seconds left

Stanley conv from the sideline

‘Dogs kick off to southern end.

Newtown get across the line but can’t ground the ball

52nd min” ‘Dogs on the attack, looking to land a killer blow

56th: ‘Dogs attack again but a wild pass flies out over the eastern touchline

Suddenly the door is open again.

64th: Jets attacking in CB 20 metres, and the ‘Dogs are forced into a goal-line drop-out

The big Berries forwards are starting to feel the pinch

68th: Quick hands by Jets to the right and Kenny Niko scores in nth-east corner

‘dogs forwards feeling the lash on their backs

72nd min: Smart inside ball from Cherrington and big Saulala Houma steam-rolls his way over to score under the posts

Crowd on the hill goes troppo

75th: ‘Dogs get a set on halfway and then get a scrum-feed 10 m out from Jets line

Jets have the ball with 40 seconds left

Penalty to Newtown 40 m out and nearly in midfield

‘Dogs catch the ball and throw it about but play breaks down on half-way line.

We need to tidy up in several areas

Some individuals need to work on their own skill sets

Errors made inside our own 20 proved to be costly.