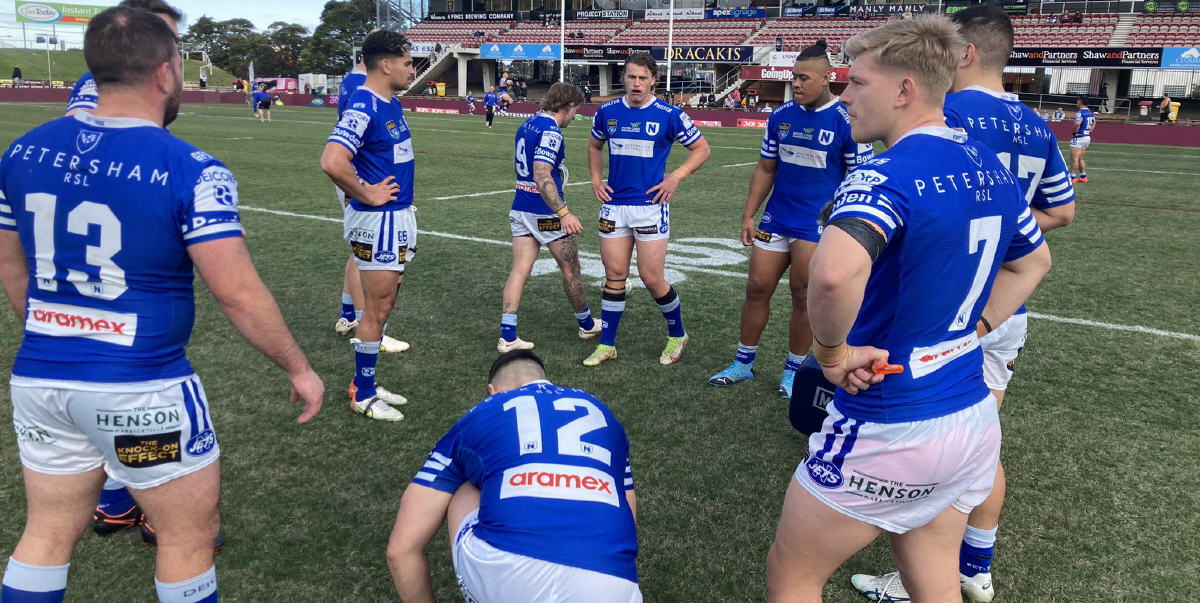 The Newtown Jets prior to the commencement of Saturday’s match at 4 Pines Park, Brookvale (Steve Russo photo, 20th August 2022).

Jets stay on top of the table after seventh straight win

Newtown Jets have rounded out a seventh straight win after accounting for the Blacktown Workers Sea Eagles 50-8 to maintain their top place on the NSWRL Knock-On-Effect NSW Cup ladder.

Coming off a bye last weekend, the Jets lit up 4 Pines Park with three tries in the opening 15 minutes to lead 16-0.

Winger Mawene Hiroti was first to score before the two powerhouse front-rowers Thomas Hazelton and Jesse Colquhoun each powered over within the space of four minutes.

With an even share of possession Blacktown’s left edge began to look dangerous, but the Workers’ big men were unable to back it up through the middle.

This left scheming Jets hooker Jayden Berrell to his own devices and a trademark inside ball saw Franklin Pele crash over for Newtown’s fourth try.

Another try, this time to Jets halfback Ryan Rivett, extended their advantage to 28-0.

From there the points kept flowing. Four minutes after the halftime break will–o‘-the-wisp five-eighth Luke Metcalf showed a clean pair of heels crossing for his 14th try of the season, before fullback Kayal Iro grabbed one of his own six minutes later.

The powerfully-built Pele then bagged a double with a long distance sprint. Blacktown Workers finally registered a try in the 70th minute through Bailey King, when the winger finished a right shift in the scoreboard corner.

Blacktown Workers quickly doubled their tally when fullback Jake Toby evaded several defenders on the way to a determined try, before second-rower Charbel Tasipale brought up Newtown’s half century with a try right on full time.

Jets winger and goal-kicker Mawene Hiroti finished the match with a personal haul of a try and seven conversions.

Next week in a possible finals preview, Newtown finishes the regular season against third-placed Canterbury-Bankstown at Henson Park on the Jets’ annual reunion day.

Today’s win takes Newtown one step closer to the minor premiership, but with the second-placed Panthers just two points behind and with a bye next week, the Jets need a final round win over the Canterbury Bulldogs to overcome Penrith’s superior points differential to maintain the top spot.

The 2022 NSW Cup premiership table after both Newtown and Penrith have played 23 rounds:
https://www.nswrl.com.au/ladder/?competition=113&round=23&season=2022

Congratulations to Newtown’s NSWRL Ron Massey Cup partnership club the Glebe Dirty Reds, who defeated the Hills Bulls 38-10 in the Major Semi-Final this afternoon, and now move on to the Grand Final at Netstrata Jubilee Stadium (Kogarah Oval) on Sunday, 4th September.