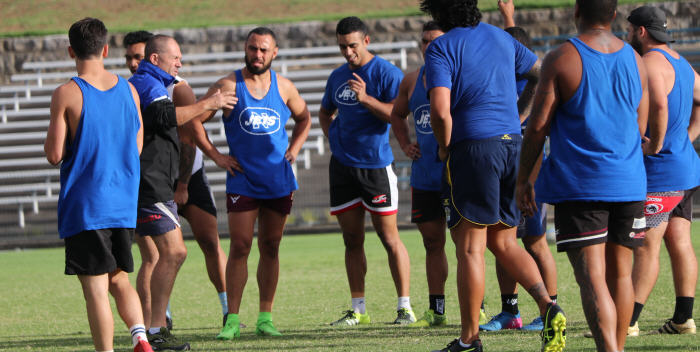 Newtown head coach Greg Matterson lays down the law to a group of Jets triallists in a hot and sweaty pre-season training session at Henson Park on 16th January. Photo: Wayne Leong Photography

Jets step up the tempo at pre-season training

Any rugby league history wonk driving at the southern end of Illawarra Road last Thursday evening might have done a double take. Here was the somewhat bizarre spectacle of a rugby league team wearing the colours of the supposedly-defunct Glebe Dirty Reds playing in a trial match on Mahoney Reserve, South Marrickville.

The explanation was that it was a twenty-five minute trial match staged by the Newtown Jets and the Glebe-Burwood clubs as part of their pre-season program. As Jets head coach Greg Matterson remarked after the trial, “this was a useful short trial which proved to be very helpful to the coaching staff of both clubs in assessing how their pre-season triallists performed under match conditions.” The trial was refereed by Tom Cambourn from the NSW Rugby League referees association.

For the record, here are the two trial squads that played at Mahoney Reserve last Thursday, 18th January. Where the details are known the new triallists have their 2017 club in brackets after their name:

Our favourite racehorse Newtown Bluebag won the Highway Handicap at Randwick on Saturday, 13th January. Long-serving Newtown Jets Director and financial benefactor Terry Rowney and lifelong Newtown Jets supporter and former Mayor of Marrickville Barry Cotter are both members of the syndicate that owns this distinctively-named and well-performed horse.

Long term major sponsor Petersham RSL is looking to improve its ongoing service to the local community by upgrading the club facilities. The community has until the 30 January 2018 to comment on the proposed changes. Petersham RSL needs the help of the community to support the proposed changes. Click the below link to read more about the proposed changes and to complete a short form (which only takes 5 minutes) showing your support. Your support of our great sponsor who this season celebrates twenty years of supporting the Newtown Jets is very much appreciated:  https://www.yoursayinnerwest.com.au/planning-proposal-for-three-sites-in-petersham

The Newtown RLFC celebrated its 110th birthday on Monday, 8th January 2018. This article in the current Inside Sport Magazine highlights the historic buildings in Sydney that are all closely associated with the formation of the rugby league code in NSW. Go to this link: https://www.insidesport.com.au/news/sydney-rugby-leagues-town-halls-of-history-481295/page0

Talking of the club’s 110th birthday, the Newtown RLFC received a wonderful gift from the Newtown-based freelance artist, illustrator and graphic designer Jacqui Duncan. Jacqui presented the club with a marvellous illustration of the Newtown Town Hall (where the Newtown RLFC was formed on the evening of the 8th January 1908). Jacqui has a superb range of sketches and illustrated posters of a wide range of Newtown and inner-western buildings and street scenes for sale. Her website is: www.littlecity.net.au  Her work is top-class and provides some excellent gift suggestions.

Mickey Paea was a first-class player with Newtown in his three seasons with the club between 2006 and 2008. He was also a great clubman and was very popular with the Jets supporters. Along with stints at St George-Illawarra, Canterbury-Bankstown, Hull KR, Hull FC and the Newcastle Knights, Mickey also represented Tonga on numerous occasions. He has recently signed again with Hull FC (The Airlie Birds) and is shown here in some amazing footage singing a Christmas carol in front of a packed crowd at the Hull City Hall: http://www.hulldailymail.co.uk/sport/rugby-league/watch-hull-fcs-mickey-paea-945463