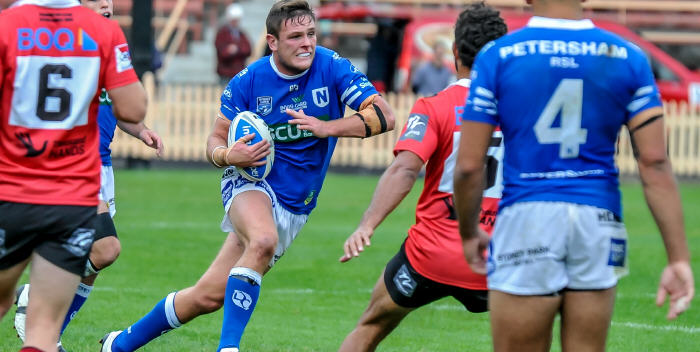 More than a few Newtown supporters of a certain vintage are beginning to compare the Jets hard-working front-rower Kurt Dillon with the great Bill Noonan from back in 1979 and 1980. Photo: Gary Sutherland Photography

Jets triumph in a thriller against Norths

Jets winger Edrick Lee has been both hero and villain for Newtown supporters in recent weeks, but he was back in favour at North Sydney Oval on Sunday afternoon. With the scores between the Jets and Norths tied at 12-all with eight minutes left to play, the long-striding Lee took an intercept and raced ninety metres to score the winning try.

This was an exciting match played with great intensity and physicality. Neither side was able to score in the early stages of the game, but in the 16th minute Jets centre Jesse Ramien ran onto a slick inside pass from halfback Fa’amanu Brown to score. Brown converted this try and later added a penalty goal. Norths scored a converted try just prior to half-time for Newtown to take an 8-6 lead into the break.

The Jets extended their lead to 12-6 early in the second half when the on-song Brown laid on a delayed pass that enabled burly centre Jordan Drew to crash over for a try. The Bears pulled back with an unconverted try and a penalty goal to draw level at 12-all with twenty minutes left to play.

The Bears were in full attacking mode at Newtown’s end inside the last ten minutes, when an adventurous cut-out pass provided the intercept specialist, Edrick Lee, with his opportunity to win the game. The Shoremen laid on the razzle dazzle in the game’s last minutes but they could not crack the Jets’ defensive line.

Coach Matterson noted in his post-match comments that there really was very little between the two teams in this game. The Jets badly needed to win after several recent narrow losses. This match was a tough contest with some bruising exchanges in the forwards. Newtown’s win was based on making fewer errors and a determined defensive effort. Matterson said this had been a really brave win, but the fight for a place in the 2017 finals goes on. He rated props Kurt Dillon and Tepatasi Fuiavailili as the best of a good pack of forwards, while Matt Evans, Jordan Drew and Jesse Ramien had been the best in a strong set of backs.

The Newtown Jets are back home at Henson Park this Saturday, 20th May, when they host the 2016 premiership winners, Illawarra. This Saturday at Henson Park has been designated as Ladies Day, with the Jets-Illawarra match kicking off at 3.00pm.