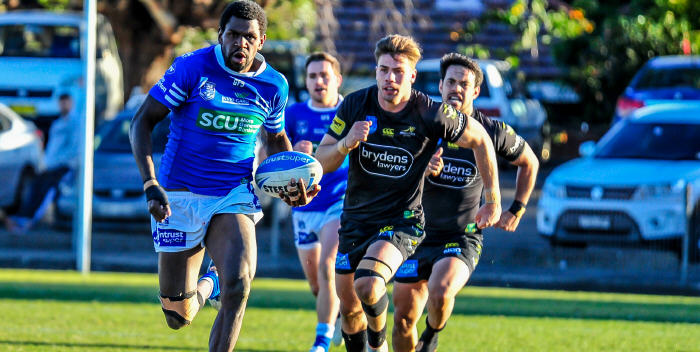 Jets turn on a gritty display at windy Henson

The Newtown Jets gave a resolute performance in their narrow 10-8 loss to a strong Mounties team at Henson Park on Saturday. A gusty southerly wind made the playing conditions difficult for both teams. The Jets led the Canberra Raiders partnership club 8-4 at halftime, and went close in the second half to staging what would have been a major upset in the Intrust Super Premiership.

Both teams scored two tries and Mounties’ sole conversion made the two-point difference between the sides at fulltime. The Jets put in a tremendous defensive effort in the second half when Mounties had a lot of ball and time in possession at Newtown’s end of the field. Jets defenders prevented tries on three occasions when Mounties players had crossed the tryline but were unable to ground the ball.

Coach Greg Matterson rated this as a spirited showing by his team, with several players carrying injuries and the final team line-up not being decided until Saturday morning. Tyla Tamou, Edrick Lee, Reubenn Rennie and Joseph Paulo all had big games in the backs, while the Newtown forwards were fearless in taking on a much bigger Mounties pack.

The Jets play their final home game of the season at Henson Park next Saturday when they meet the North Sydney Bears at 3.00pm. This Saturday is the club’s annual reunion day and also the deciding match in the 2017 Frank Hyde Shield series, played each year between the two 1908 foundation clubs.