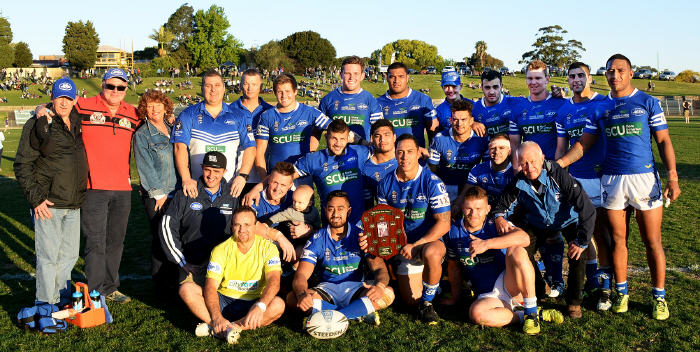 Michael and Patrick Hyde and Maria Harkness join with the victorious Newtown Jets (winners of the Frank Hyde Shield for 2015) at Henson Park on Saturday. Photo: Michael Magee Photography.

Jets turn on a spirited win for their Reunion Day revellers

Newtown Jets have ended their 2015 NSW Cup season on a high note, defeating old rivals North Sydney 30-22 at Henson Park on Saturday in front of a big Reunion Day crowd. This win ensured that the Jets retained the Frank Hyde Shield for this season and also broke a long run of outs, with Newtown’s last win having been against Manly-Warringah in late June.

The Bears made a terrible start to the game, turning the ball over in their first set and then conceding a penalty. Newtown made good use of the ball and favourable field position, with winger Corin Smith scoring a smartly-taken try in the second minute. Todd Murphy proved he had brought his kicking boots along by landing the conversion from the sideline. Norths promptly turned the heat back onto the Jets, scoring two tries in rapid succession through disorganised and uncommitted defence. Corin Smith, who was a mid-year signing from the Mudgee Dragons, scored a try from a remarkably audacious individual effort which was also converted by Murphy. The Jets improved their position further when lock Tim Robinson ran a great angle to score in the 20th minute, and Murphy’s third goal gave Newtown an 18-10 lead. The Reunion Day crowd was roaring when Smith claimed his third try after the Jets turned on a precision short-side play in the 32nd minute. Norths hit back and applied plenty of pressure at Newtown’s end late in the first half, but the Jets’ defence stayed solid for them to take their 22-10 lead into halftime.

Coach Greg Matterson’s halftime talk emphasised the need for the Jets to maintain their high completion rate, to dictate terms to Norths in the battle of the forwards, and to get ready for the inevitable fightback by the finals-bound Bears. Newtown began the second half poorly when their hesitant defence and poor communication enabled Norths to put on an unlikely long-distance try. The Bears then really turned the pressure on for the next ten minutes when the Jets had very little possession and made repeated errors. Newtown eventually managed to break out of their own half and Todd Murphy sent Corin Smith racing away for his fourth try. Murphy added the extras for Newtown to lead 28-16. The Bears had a try disallowed in the 60th minute, and then punished Newtown for another handling error by scoring from a well-placed kick into the Jets’ in-goal. Newtown led 28-22 and there were still 17 minutes remaining. The Jets tackled well for the remainder of the game and a penalty goal kicked by Murphy in the 71st minute gave the Jets an eight-point buffer zone, and what was to be the final scoreline of 30-22.

Coach Matterson saw this as a bitter-sweet result for the Jets, but it had been very good to end the season with a spirited win in front of such a big crowd of loyal Newtown supporters. Matterson observed that a few more performances like this on other occasions could have ensured a place in the finals. Centre Sami Sauiluma and halfback Todd Murphy had been Newtown’s best on the day, and Corin Smith deserved credit for his four tries. Fullback Daniel Abou-Sleiman had been very safe under several high kicks in the second half and was involved in a couple of try-assists. Kurt Dillon, Kurt Kara and the rapidly-improving Malakai Houma had been the best of the forwards.

The Newtown Jets extend best wishes to their NRL partners, the Cronulla Sharks, for their upcoming NRL finals campaign. The details of the Newtown Jets annual presentation night will be announced soon.