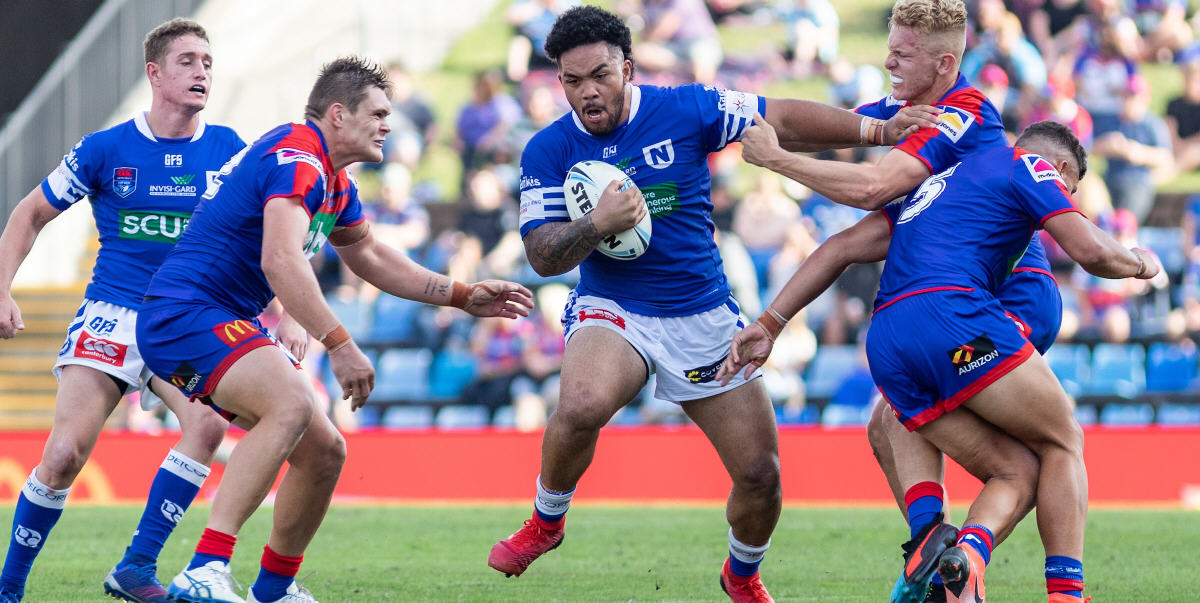 Strongly-built Newtown Jets forward Siosifa Talakai is on the rampage as he takes on these Newcastle Knights defenders at the McDonald Jones Stadium on Friday afternoon (!5th March). Jets halfback Jack A. Williams is on the left of this image. Photo: Mario Facchini, mafphotography

The Newtown Jets made a disappointing start to the 2019 Canterbury Cup NSW competition when they lost 24-4 to the Newcastle Knights at McDonald Jones Stadium on Friday afternoon (15th March). The Jets turned in a poor first half performance and trailed 16-0 at half-time. Newtown scored a try early in the second half through centre Jackson Ferris, but never really looked like taking control of the game away from the Knights.

The Jets paid the price for their ordinary first half in which their completion rate was 55%, and with the Knights scoring two long distance tries after the Jets had been on the attack at Newcastle’s end of the field. Newtown had a bigger share of the ball in the second half but lacked the precision to turn this possession into points.

The Knights made their share of errors but didn’t allow the Jets to gain too much benefit from them. Newtown needed better execution in attack when inside the opposition’s twenty-metre zone.

Halfback Braydon Trindall was very impressive on debut for Newtown, turning in a strong defensive performance and laying on several clever cut-out passes that created opportunities for his outside backs.

Newtown’s next match is against Mounties, the Canberra Raiders partnership club. This game is at Shark Park on Saturday, 23rd March at 12.45pm and will be televised live on Fox Sports.

Playing surface: Excellent.
Weather: Mild, 22 degrees, strong southerly breeze in both halves.
Newtown kicked off in the first half, running to the southern end.