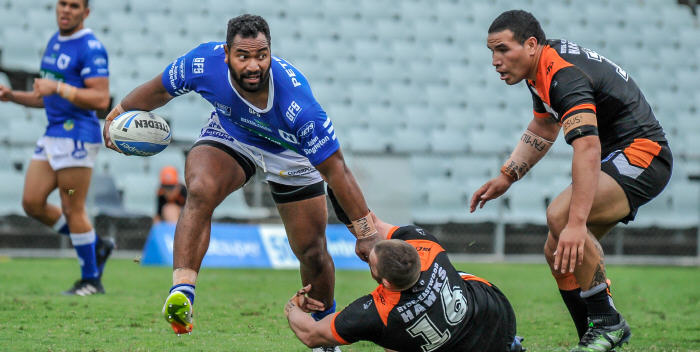 A conversion from the sideline five minutes from fulltime gave Newtown a 26-24 win against Wests Tigers at Campbelltown Stadium on Saturday afternoon. Wests Tigers led 18-10 at halftime and 24-20 late in the second half in a game where the lead changed hands several times.

As Jets coach Greg Matterson observed after the game, “there’s still a lot of improvement needed in this Newtown side, but we won’t be too shy to take the competition points on offer!” Both teams needed to win to re-ignite their seasons and they turned on an thrilling spectacle. There had been a certain amount of drama within the Wests Tigers club in the preceding week, and it was thought that this might provide added incentive for the home team.

Newtown edged ahead of Wests Tigers 20-18 midway through the second half, but the Jets looked to be in real trouble when the Tigers regained the lead 24-20 with less than fifteen minutes remaining. Newtown’s Samoan international five-eighth Penani Manumalealii laid on a superb cut-out pass for winger James Tuitahi to score in the northern right-hand corner, and halfback Fa’amanu Brown coolly landed the conversion from wide out to get the Jets home.

Coach Matterson said there was a lot of improvement needed by the Jets in defence and onfield-discipline but he was pleased with the team’s inventiveness in attack. Kurt Dillon, Tony Williams and Jaimin Jolliffe were the best of the forwards on Saturday, while Manumalealii and Brown had stood out in the backs.

The Newtown Jets take on Newcastle Knights next Saturday, 1st April, at the Southern Cross Group Stadium at 12.40pm. This fifth round Intrust Super Premiership match will be televised live on Fox Sports.