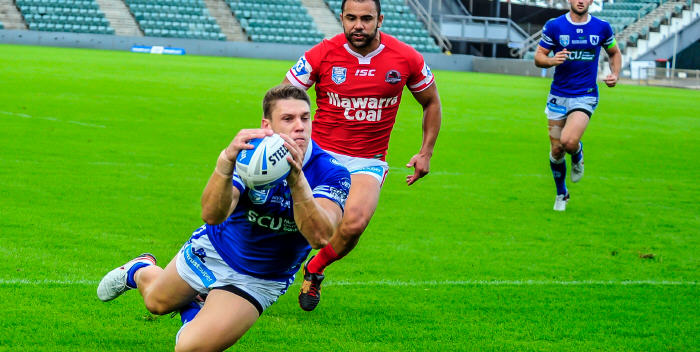 Newtown Jets lock horns again with Illawarra Cutters for the Tom Kirk Cup at Henson Park on Saturday 4th June. Hopefully this time the Jets will enjoy the spoils of victory and reclaim the silverware. Photo: Gary Sutherland Photography

… in fact it could well be termed the June Festival of Rugby League Football.

This weekend (28th and 29th May) is a bye for the Newtown Jets. There were three 12th Round ISP NSW matches played on Saturday, 28th May:

There will be NSWRL Tertiary Rugby League curtain-raisers on Saturday, 4th June from 11.00am.

The guest local school for the day is St Pius, Enmore.

After next Saturday’s game (4th June), all Newtown Jets supporters are invited back to the VIC on the Park at 2 Addison Road, Marrickville.

The next Saturday, 11th June 2016, is going to be a truly amazing day in the history of international Rugby League and also in the entire history of Rugby League being played at atmospheric Henson Park.

There will be history-making curtain-raisers at Henson Park on this day from 11.00am onwards. The two early curtain-raisers are games between Peru and Uruguay (Rugby League Sevens) and then Colombia versus Ecuador (Rugby League Nines). The main curtain-raiser at 12.50pm between El Salvador and Chile will be a ground-breaking inaugural 13-a-side international Rugby League match between two Latin American countries. Venerable old Henson Park might never be the same with such a massive influx of exotic South American and Central American influence!

The 11th June will be an SCU Family Fun Day, and after the Newtown-Wentworthville main game, everyone is again invited back to the VIC on the Park at 2 Addison Road, Marrickville.

This absolutely incredible cavalcade of Rugby League action will continue at Henson Park in June 2016, with the Newtown Jets playing at home again on the 18th June.

There will be NSWRL Tertiary Rugby League curtain-raisers from 11.00am.

This is going to be another SCU Family Fun Day, featuring Syd the Pig and Jetman.

And the guest school for this Henson Park home game occasion is going to be the Petersham Public School.

After the Jets-Warriors main game on the 18th June, all Newtown Jets supporters are invited back to the Golden Barley Hotel on the corner of Edgeware Road and Llewellyn Street, Enmore.

There were some outstanding tries scored in Newtown’s celebrated 32-16 win over Wyong last Sunday. Take a look at all of the tries in the NSWRL’s ISP NSW 11th Round highlights package: http://www.nswrl.com.au/news/2016/05/27/highlights_isp_nsw_r.html

There is a double-page poster spread in this week’s Rugby League Week (26th May, pages 24 and 25) of the 2016 Cronulla-Sutherland Sharks NRL squad, including nearly all of the Sharkies lads who are playing so well with their ISP NSW partnership club, the Newtown Jets.

The latest Rugby League’s Next Gen interview is with Kurt Capewell, who is winning an army of new fans with his recent displays with the Newtown Jets: http://bit.ly/1NVlGtE

Here are Gary Sutherland’s photos from last Sunday’s Newtown-Wyong match, including some of giant prop David Fifita proving himself to be a goal-kicker of some repute: http://www.pbase.com/gsphotography/newtown_vs_wyong_220516&page=all

And these photos were also taken at the Jets-Wyong game: http://lookpro.photoshelter.com/gallery/ISP-Round-11-Wyong-Roos-v-Newtown-Jets/G00004IP0JzGy7c0/C0000y.TfJXjWCJ

This match report and excellent Gary Sutherland action shot are on pages 15 and 16 of this week’s Cooks River Valley Times (Wednesday, 25th May): http://bit.ly/1TKWncJ

Hard-working Widnes Vikings lock forward Hep Cahill had several good seasons with Newtown between 2006 and 2008, and he was named in the March Super League Team of the Month in the authoritative UK Rugby League World magazine: http://www.widnesvikings.co.uk/club/teams/player_profile?519022-hep-cahill

And here is this week’s Newtown Jets quiz:

In 2009 Newtown fielded a team in the NSWRL SG Ball Cup competition (thanks largely to the generous funding provided by Terry Rowney). This team contained many outstanding young Rugby League prospects and under Joel Greig’s coaching, they went very close to winning the competition. This week’s quiz asks you to name any three members of the 2009 Newtown RLFC SG Ball Cup squad who are currently playing in the 2016 NRL competition. The first correct entry received at jets@newtownjets.com will receive a Newtown Jets cap or t-shirt.