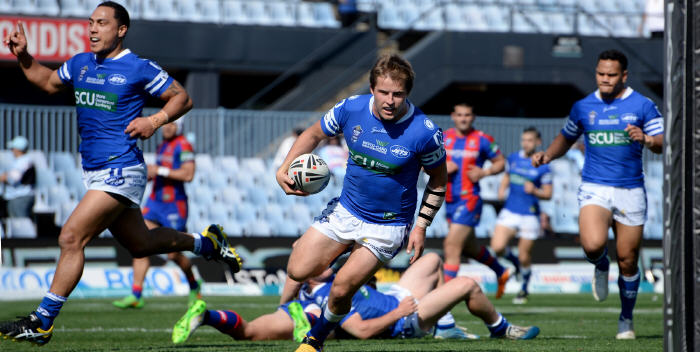 Newtown’s quest for a place in the 2015 NSW Cup finals series was brought to an abrupt end by the Newcastle Knights at Remondis Stadium on Saturday. The Jets made a great start and led 22-4 after 25 minutes, but they lost the plot from that point onwards. The Knights scored twice before halftime to go in at the break trailing 22-14, and then scored five more tries in the second half to take a 40-22 lead. Newtown scored in the last minute to make the final score 40-26 in Newcastle’s favour.

The Jets began in the best possible style with Mitch Brown gathering in a grubber kick from Todd Murphy to score in the second minute. Murphy was again the instigator when he sent Gerard McCallum slicing through the Knights defence for a try in the 8th minute. Murphy’s conversion gave Newtown a 10-0 lead. An error by the Jets in their own quarter was quickly punished by the Knights who scored an unconverted try. Both sides were guilty of handling errors and badly-directed passes in the opening twenty minutes but Junior Roqica put Newtown on the offensive with a strong run , ending in Murphy laying on a deft pass to put Brown in for his second try. Murphy’s conversion extended Newtown’s lead to 16-4 in the 22nd minute. Three minutes later hooker Pat Politoni took advantage of some careless marker defence and burst out of dummy-half, off-loaded to the fast-supporting McCallum who in turn passed to Murphy who scored under the posts. Murphy added the extras to his own try and Newtown now led 22-4. At this point the match narrative took a decided turn for the worse for the Jets and a series of Newtown errors energised the young Knights who put a lot of pressure on the Jets’ defence. The Knights scored two tries late in the first half to put themselves right back into the game.

The second half had a horror start for Newtown with the Knights regaining the ball from their own kick-off and scoring an unconverted try in the ensuing set. The game’s momentum was now with the Knights, who stormed through some demoralised Jets defence to score in the 49th minute and then added two more tries in the following five minutes. Newtown regrouped and tried to pull back the Knights’ 34-22 lead, but several scoring chances came to grief through dropped ball or wayward passes. The Fox Television commentators felt Newtown had the rough end of some contentious refereeing decisions but the game was gone. The Knights applied the coup de grace with a converted try four minutes out from fulltime, with centre Sami Sauiluma scoring Newtown’s sole second half try in the last minute of play.

The Jets coaching staff noted the excellent start to this game and what might have been had Newtown maintained control after running up a 22-4 lead. Errors in the second quarter let the Knights back into the game and as head coach Greg Matterson observed. “it was to hard to turn the ship around once the momentum of the game had swung the Knights’ way”. The Knights had a better completion rate in the second half and the big Jets forwards felt the pinch in the warmer weather. Todd Murphy and Sami Sauiluma were rated as Newtown’s two best players in what had been an underwhelming team performance on live Fox Television and played at the Cronulla Sharks’ home ground, Remondis Stadium.

The Jets return to Henson Park next Saturday, 29th August, for their last game of the 2015 season. Newtown take on long-time rivals North Sydney at 3.00pm in a game that will determine this year’s winner of the Frank Hyde Shield. This Saturday is also the annual Newtown Jets club reunion day which is always a highly popular inner-western community event.