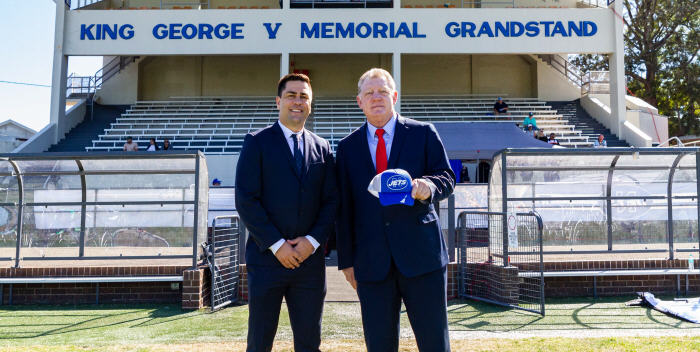 Two distinguished former players with the Newtown Jets, Jamie Soward and Phil Gould, were on broadcasting duty with Channel Nine at Henson Park on Saturday. The mercurial five-eighth and halfback Jamie Soward played with the Jets in 2006 and 2007, while the clever ball-playing second-rower Phil “Gus” Gould was with the club in 1981 and 1982. Photo: Mario Facchini (MAF Photography)

The Newtown Jets and North Sydney Bears turned on a splendid rugby league occasion at Henson Park on Saturday. The autumn weather was superb; there was a big crowd in attendance; historic Henson Park has never looked better; the match was telecast live on Channel Nine; and to top everything off, the Jets and Bears played out a thrilling 22-all draw.

Newtown scored the first try of the game but the Bears had the better of play for most of the first half, taking an 18-6 lead into the halftime break. Newtown had gone close to scoring on two other occasions that would have changed the trend of the game in the first half.

The Jets turned their game around in the second forty minutes and hit back with three tries, taking a 22-18 lead just five minutes out from fulltime. Newtown failed to close out the game and Norths scored a contentious try in the last minute of play to draw level at 22-all. The conversion attempt from the sideline struck the left-hand upright and bounced away, much to the delight of the large pro-Jets crowd.

Hooker Blayke Brailey and second-rower Briton Nikora were two of Newtown’s best forwards, while halves Jack A. Williams and Kyle Flanagan and centre Bessie Aufaga-Toomaga were the best of the backs. Kamikaze-like backrower Addison Demetriou made an impressive first-up appearance for the Jets in the Intrust Super Premiership, while the former Canterbury-Bankstown second-rower George Tsikrikas was also on debut for the Jets.

The Newtown club has received plaudits from the NSW Rugby League and Channel Nine for staging such a well-conducted and professionally-presented home game occasion at atmospheric old Henson Park. This was the first time a rugby league match involving the Newtown Jets had been televised live from Henson Park in 36 years. The Jets and the Bears put on a quality exhibition that will do great credit for the Intrust Super Premiership competition, plus Channel Nine’s ratings for this new live rugby league program are likely to go through the roof.

The Newtown Jets take on the top of the table Canberra Raiders partnership club, Mounties, next Saturday (12th May) at 3.00pm at the Aubrey Keech Reserve, Hinchinbrook.

This match was the first leg of the 2018 Frank Hyde Shield series.

Here’s a fine selection of photos from last Saturday taken by Mario Facchini (Newtown) and Steve Little (North Sydney) and presented on the NSWRL website:

The Glebe-Burwood team turned out in the iconic maroon and white colours of the famous Glebe Dirty Reds RLFC. The Dirty Reds played in the NSWRL grade competitions from 1908 to 1929, and were miraculously resuscitated as a club in 2015. Saturday was the first occasion that the Dirty Reds had ever played at Henson Park, and their historic appearance at Henson on Saturday added to the status and dignity of the occasion. The Glebe-Burwood RLFC is undefeated after five rounds in the 2018 Ron Massey Cup competition.