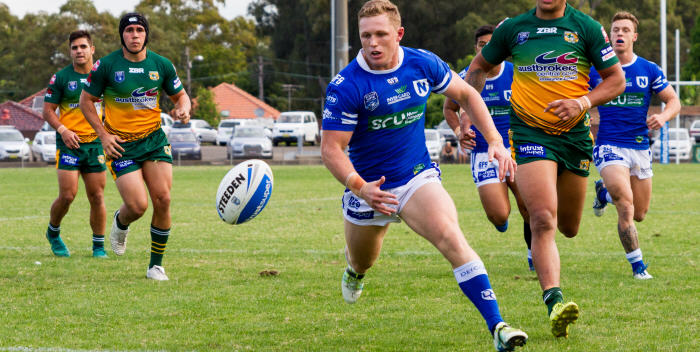 Newtown backrower Jack Williams, who hails from Cooma in the high Monaro region, is pictured about to score the Jets’ first try at Henson Park last Saturday. Photo: MAF Photography

Narrow defeats are proving to be costly for the Jets

For the second time in three weeks, the Newtown Jets have been narrowly defeated by one of the Intrust Super Premiership’s top two teams. The Jets were at home at Henson Park for the first time this season and lost 19-16 to the second-placed Sydney Roosters partnership club, Wyong. The Central Coast team led 13-12 at halftime after Newtown had opened up a 12-0 lead after eighteen minutes.

There had been several late changes to the original Newtown team line-up, but classy play-maker Daniel Mortimer made a welcome return to the Jets ranks after a six-week lay-off due to a knee injury. Young backrower Jack Williams scored for Newtown in the sixth minute when he won the race to ground the ball from a well-directed grubber kick by Fa’amanu Brown. Fullback Leigh Higgins, one of several youngsters in their first season with Newtown and in senior rugby league, scored a great try after excellent preliminary work by Jayden McDonogh and Matt Evans.

Newtown’s standard of play deteriorated in the second quarter of the game as their error rate mounted and there were some vital missed tackles. Wyong scored two converted tries and kicked a field goal right on half-time to go into the break with a 13-12 lead.

Jets coach Greg Matterson laid into his team at half-time, saying they had allowed Wyong back into the game through their repeated handling errors and some breakdowns of their well-practiced defensive structure. Fatigue was a factor for both teams as the game was played in unusually humid conditions for late April.

The Jets conceded a try and penalty goal in the third quarter but hung in there looking for a scoring opportunity, which came in the 64th minute when Daniel Mortimer’s precise short pass sent backrower Jayden Walker racing thirty metres to score. The try was unconverted, and Newtown was back in the fray trailing 19-16. Their chance of seizing a late victory was blown when a Jets player grabbed an interception and seemed likely to score, but was unable to hang onto the ball as he sped towards the Wyong line.

Coach Matterson observed after fulltime that Newtown had worked their way down to Wyong’ end on several occasions, but came away empty-handed because of poor end of set options. Both teams had relatively ordinary completion rates which confirmed the high handling error count on the day.

Kurt Dillon, Jaimin Jolliffe and Jayden McDonogh had been Newtown’s best forwards and the much-improved Matt Evans was the best of the backs. Daniel Mortimer and Fa’amanu Brown will combine more effectively in the halves with more game time together.

The Jets play away to Wentworthville at Ringrose Park next Sunday, 30th April. This 9th round Intrust Super Premiership match is set down for a 3.00pm kick-off.