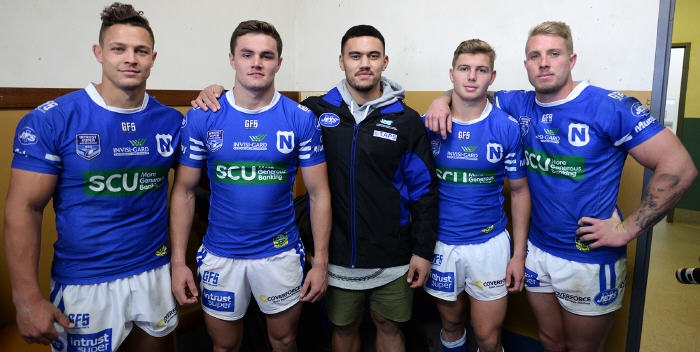 The Newtown Jets revisit the days of the Magnificent Seven.

The Newtown club of 2018 vintage has brought back memories of that famous achievement by having five players named in the 2018 Intrust Super Residents Squad, who will take on the Queensland Residents in a curtain-raiser to State of Origin II at ANZ Stadium next Sunday, 24th June.

The five players named are centre Aaron Gray, hooker Blayke Brailey, front-rower Kurt Dillon, halfback Kyle Flanagan and second-rower Scott Sorensen. In fact it could have been six players from Newtown – centre Reubenn Rennie was named in the provisional squad but has been ruled out due to injury.

This is without doubt the greatest representation by the Newtown club in any NSWRL representative team named since Newtown re-entered the second tier level of rugby league in 2000, or from when the club was effectively reborn in 1991.

Two of the club’s most scrupulous historians, Terry Williams and John Lynch, cannot recall a bigger Newtown contingent in any rugby league representative squad since those glorious days of the 1911-12 Kangaroos.

As it happened, the five Newtown players projected to be named in the NSW Residents squad were photographed in the dressing rooms at Henson Park following last Saturday afternoon’s match against Mounties. The players in the attached photo are (from left to right): Scott Sorensen, Kyle Flanagan, Reubenn Rennie (ruled out because of injury), Blayke Brailey and Aaron Gray. Kurt Dillon has since been added to the NSW Residents squad.

This is indeed a singular moment in the history of the NSWRL foundation club that rose from the ashes back in 1991, and that has continued to contribute positively to rugby league history ever since.