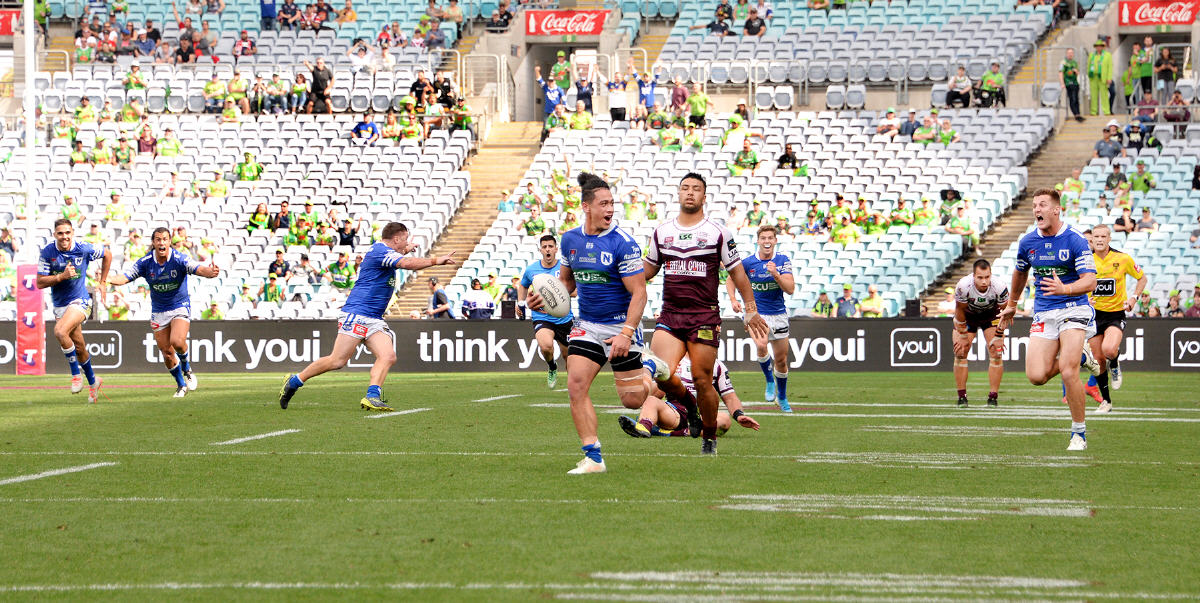 On 6th October 2019 at ANZ Stadium, the Newtown Jets defeated Burleigh Bears 20-16 in the NRL State Championship Final. This win effectively made Newtown the best club team (outside of the NRL competition) in Australia, New Zealand and Papua-New Guinea. Newtown centre Jackson Ferris (with the ball) is shown sprinting away for the winning try with less than ten seconds of regular time left to play, having seized upon a pin-point short kick by his team-mate Billy Magoulias. Newtown had trailed 10-2 at half-time and 16-14 going into the last ten seconds of the match. Photo: Michael Magee Photography

The Newtown Jets held their Victories Dinner and Presentation Night at the Petersham RSL Club on Tuesday evening, 26th November.

A big crowd filled the club auditorium to pay tribute to what has been a year of extraordinary achievements for the oldest club in rugby league.

The Jets won the NSWRL Canterbury Cup NSW Grand Final and the NRL State Championship Final, with both titles being won in the most frenzied and thrilling of circumstances.

The prize winners on the night included:

Best back – Will Kennedy

The NSW Rugby League CEO David Trodden praised the Newtown club for its contribution to the rugby league game over so many years, and he noted the club’s ability to draw large home crowds and to continually stage innovative home game occasions at Henson Park. He made the observation that the Newtown club “transcends victory and defeat” and that the club holds a special place in our game’s history and folklore.

The Newtown Jets are back in training for the 2020 season (their 21st season since re-entering the second-tier level of rugby league football back in 2000). New signings and player movements will be advised in future news bulletins.