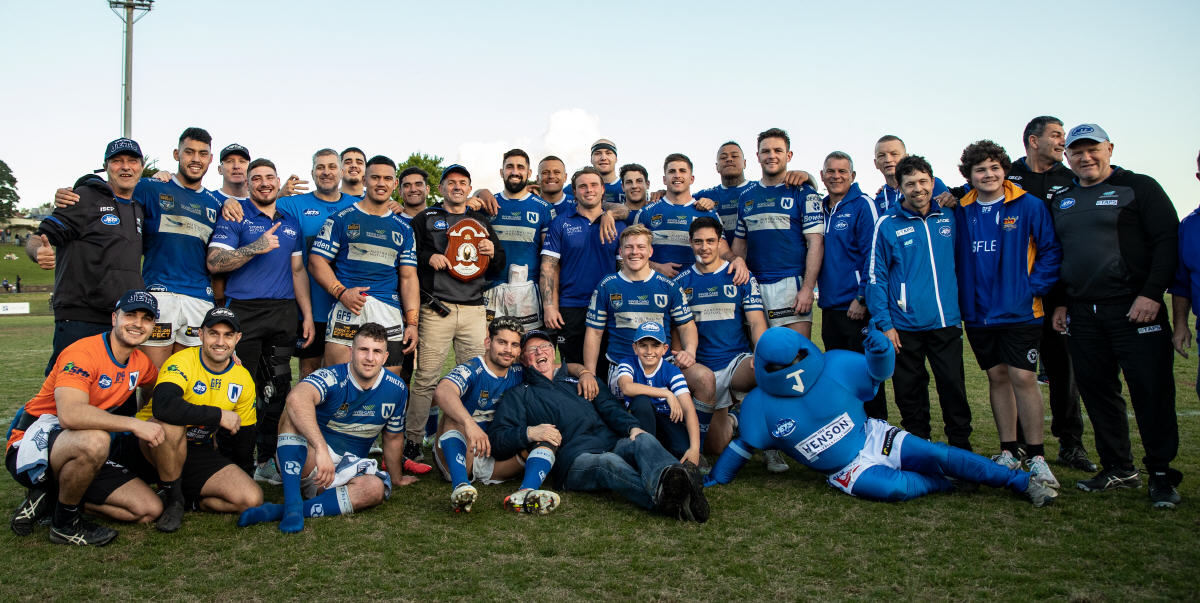 The Newtown Jets turned on a dramatic finish for their Reunion Day crowd, with fullback Mawene Hiroti kicking a penalty goal after the fulltime siren to salvage a 22-all draw with the third-placed Canterbury Bankstown Bulldogs.

The draw ensured that Newtown would finish ahead of Penrith on the premiership table and thereby claim the 2022 Knock-On Effect NSW Cup Minor Premiership title.

Newtown went into this match somewhat understrength with several regular players called up for NRL duty with the Cronulla Sharks. Jets coach Greg Matterson would have been pleased with the character and determination shown by his side, even if they fell short of actually winning this final game at Henson Park for 2022.

Newtown scored first with centre Addison Demetriou racing over on the end of a slick left-side backline movement, but two tries to the Bulldogs saw the visitors take a 10-6 lead into the halftime break.

The Jets best attacking spell was early in the second half, with tries to second-rower Kayne Kalache and centre Reuben Rennie putting Newtown back in front by 16-10.

Canterbury broke through Newtown’s defence and posted a converted try in the 59th minute to lock the scores up at 16-all.

Jets five-eighth Billy Magoulias, who had created Rennie’s try with a superb flick pass, snapped up an intercept and sent winger Tyla Tamou diving over to score in the north-eastern corner, much to the appreciations of the Reunion Day revellers on the Henson Park hill.

Newtown now led 20-16, but the Bulldogs turned on a high-speed long distance try with just ten minutes left to play, with winger Declan Casey scoring underneath the southern end goal posts. Canterbury now led 22-20, with this converted try being the fourth change in the lead for the afternoon.

Following a wild scuffle behind the goalposts, Jets hooker Jayden Berrell and Bulldogs prop Phillip Makatoa were both consigned to the sin-bin for the remainder of the match.

Roared on by the large home crowd, Newtown hurled everything at Canterbury’s defence in those desperate final minutes. The Jets forced a Bulldogs goal-line drop-out and Reubenn Rennie seemed to miss a scoring chance in the 78th minute.

The final act came with big Jets forward Franklin Pele having the football illegally stripped from him, and Newtown was awarded a penalty thirty metres out from the tryline and to the right of the northern end goal-posts.

Hiroti’s penalty goal attempt was successful, and Newtown had won the Minor Premiership title for the first time since the Jets were admitted to the second-tier level of Australian rugby league in 2000.

Playing surface: Very good.
Weather: 16 degrees, scattered clouds, light rain had fallen in the morning.
There was quite a reasonable Reunion Day crowd in attendance, given that rain had been repeatedly forecast for Saturday.
Maureen Elsegood (Frank “Bumper” Farrell’s daughter) and Jack Elsegood (“Bumper” Farrell’s grandson) were both in attendance and very much enjoyed the occasion.
Peter Raper, a younger brother of the late John Raper, represented the famous Raper family at the Newtown RLFC Reunion.