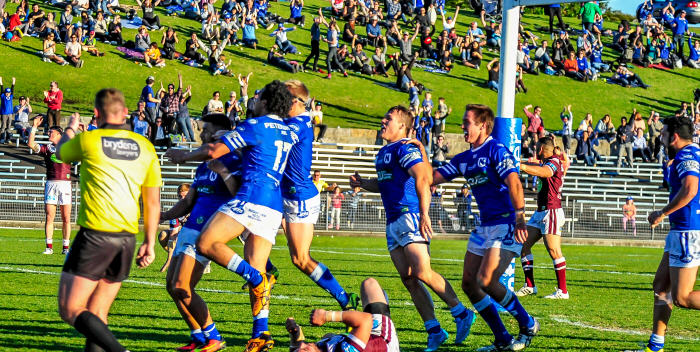 Newtown half-back Fa’amanu Brown is mobbed by his Jets team-mates after scoring the try in the game’s 78th minute that enabled the Jets to draw level with Manly-Warringah at 38-all. Brown then converted his own try for Newtown to win 40-38, after the Jets had trailed 38-12 at the 62nd minute mark. Photo: Gary Sutherland Photography

Newtown Jets fans all agree …. This was one of the greatest comebacks ever seen at Henson Park

Details of the 25th Round Intrust Super Premiership NSW match between Newtown and Manly-Warringah, played at Henson Park on Saturday, 27th August 2016 by Glen ‘Bumper’ Dwyer.

The Newtown Jets pulled off a miracle win against the Manly-Warringah Sea Eagles at Henson Park on Saturday, snatching a late 40-38 victory after having trailed by 38-12 as late as the 62nd minute. This win guaranteed the Jets fourth place on the ISP NSW competition table and a double-chance in the finals series commencing next weekend. This was also the Jets annual club reunion day, and the big crowd could barely believe what they were seeing as the Jets piled on five tries in the last 18 minutes to grab the most unlikeliest of victories. With Manly-Warringah forming a rugby league partnership with the Blacktown Workers club in the ISP NSW for 2017, this could well have been the last time the Jets and the Sea Eagles meet in a NSWRL senior rugby league match for some time. If that is the case, the Jets’ whirlwind finish will ensure that the memories of this extraordinary game will remain for many years to come.

The Manly-Warringah team was:

Here are the results from all the games played in the ISP NSW 25th Round; the ISP NSW competition table at the completion of the competition rounds; plus the leading ISP NSW try-scorers and points-scorers:

Here are all the other ISP NSW finals, venues and times for next weekend:  http://www.nswrl.com.au/news/2016/08/28/announcement_week_on.html

These interviews were conducted by Steele Sports after Saturday’s amazing match at Henson Park:

And Mario Facchini was also at Henson Park:  http://mafphotography.blogspot.com/2016/08/intrust-super-premiership-2016-round-25.html?spref=tw

There are some familiar former Newtown Jets names among the Intrust Super Cup Queensland top try-scorers for 2016:

Jonathon Reuben, now with the Townsville Blackhawks, was the season’s top try-scorer with 18; and Ryley Jacks from the Sunshine Coast Falcons was a close second with 17 tries.

Here is the timeline of events from last Saturday’s match:

Manly-Warringah kicked off with the Newtown Jets running to the Sydenham Road (southern) end.

Anthony Moraitis makes a break early in the game.

Kurt Dillon crashes over to the left of the southern goal-posts in the third minute.

Repeat penalties to Manly at Newtown’s end and the pendulum swings.

Manly score after dealing with some less than committed defence.

Manly’s last penalty was incurred on the 5th tackle, a noted coach-killer.

Jamil Hopoate was the try-scorer; try not converted; Newtown 6-4.

Manly get a repeat set at Newtown’s end in the 13th minute.

23rd min: Manly creates an overlap on the left side and winger Ben Fritz scores.

Kelly converts from the sideline. Manly 20-6.

Manly at this stage has had about 70% of possession.

29th min: Everything is working for the Sea Eagles.

John kicks ahead in Newtown’s 20 and Hopoate grounds the ball.

Penalties 4-1 to Manly at this stage.

A penalty to the Jets in the 33rd minute brought forth a chorus of Henson Park/Bronx cheers!

35th min: Nu Brown gets the Jets moving on their left-side attack and Brent Anderson scores in the south-eastern corner.

Brown converts from the sideline. Manly 26-12/

Newtown came into this match with a lot of late changes due to injury and misadventure.

Coach Matterson told his team they had shown they could still score tries with relatively little ball.

Put more pressure on their main kickers John and Godinet.

Several of Manly’s tries had been soft.

Work harder for one another in the second half.

43rd min: Jets drop a high kick, Manly score in the next set (Maguire after receiving a cut-out pass from Pita Godinet.

54th min: Jets across the line but the ball is ripped away.

Newtown back in Manly’s 20 but lose the ball in a strong attacking position.

It looks all over for the Jets in front of their reunion day crowd.

62nd min: Junior Roqica and Nu Brown lay on some variation and angled running inside Manly’s 20.

Matt McIlwrick bursts through to score well to the left of the posts.

Manly starting to run he clock down and they lose a couple of players through leg injuries.

70th min: Determined backing up by Jets players as they make inroads down the middle.

72nd min: Junior Roqica tears through the Manly defence, Corin Smith backs up to score under the posts.

The crowd starts to roar the Jets as they dare to believe in the impossible.

74th min: Junior Roqica is again involved as the Jets split Manly through the middle.

Travis Robinson backs up and races over under the posts.

The Jets are running with purpose and directness.

Manly’s defence is tired and they are obviously rattled.

78th min: Nu Brown feints to the left, causes the Manly defenders to slide; he steps back to his right and is through.

He gestures triumphantly as he dashes in near the posts.

It is 38-all and the reunion day crowd has gone completely ballistic.

The great Neil “Bing” Pringle tells me after the game that he thought he was having some sort of crazy dream!

Nu Brown converts his own try and Newtown leads 40-38 with ninety seconds left.

The Jets retrieve the short kick-off but lose the ball in a dubious strip (was it really a one on one situation?)

Manly throw the ball about desperately but the siren beats them.