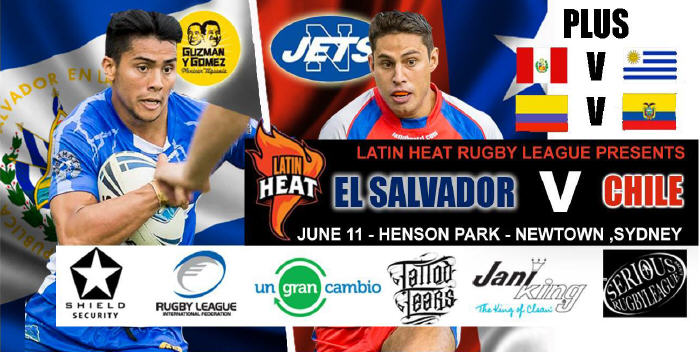 The game will be the first 13-on-13 match between two Latin American teams.

In a tribute to Rugby League’s powers of healing and unification, many of the players featuring come from refugee families who migrated to Australia in the 1980s to escape civil unrest in their homelands.

As recently as 2015, El Salvador had the highest homicide rate (excluding war zones) of any nation.

Chile and El Salvador have emerged as the strongest individual teams from a volunteer-run project now in its fourth year – Latin Heat Rugby league.

Backed from the outset by Guzman Y Gomez Mexican Taquerias, Latin Heat has unearthed players of South and Central American heritage from more than 20 nations, and provided a pathway to international representation.

While Chile and El Salvador have faced each other in sevens Rugby League before, the June 11 game will be their debut under full-sided rules.

Chile are the current GYG Latino Sevens champions, while El Salvador possesses two of the backline stars of the combined Latin Heat’s 54-16 win against Thailand in June – brothers Alvaro and Michael Alarcon.

Organisers hope to encourage a ‘Red v Blue’ theme among international league fans, with the colours of the nations similar to those of Tonga and Samoa, who feature in the Pacific Test on May 7 at Parramatta.

The undercard to the Chile v El Salvador game will feature a nine-a-side match between Peru and Uruguay, and a seven-a-side game between Colombia and Ecuador.

On a packed day for the sport, the Henson Park schedule will conclude with Newtown facing Wentworthville in the NSW Intrust Super Premiership.

Players who were born in South or Central America or have heritage links through a parent or grandparent can contact Robert@sambatimes.com to trial for these teams, or for similar matches featuring other Latino nations in the future.

GYG Latin Heat is also presently identifying Latino-heritage players in North America who may play in the USARL Nines near Philadelphia on Saturday, May 21.

Official charities supported are Amnesty International and Live To Give Projects.