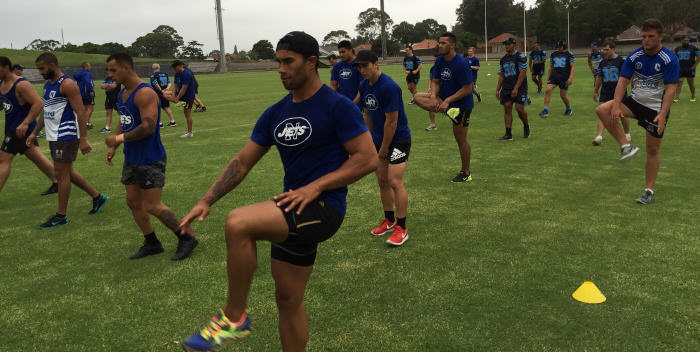 Your correspondent attended the Newtown Jets training session on Thursday, 14th January. You would recall that this was a ferociously hot day, with the temperature reaching 39.5C in the Sydney CBD, 40.5C at Sydney Airport and 41.5C at Penrith. Mercifully for our intrepid pre-season training squad, a very strong Southerly Buster arrived about 3.30pm, bringing the temperature down to the low 20’s by the time the boys were training.

The players met at the gymnasium for training at 5.00pm. The gym is very well equipped and presented these days, and in all it represents a remarkable transformation from the lack of important training facilities that our club had going back to our first partnership with the Cronulla Sharks back in 2005. Of all the many generous contributions made by Terry Rowney to the Newtown RLFC over the years, it’s difficult to think of a single more valuable contribution than the gymnasium premises at 14 Rich Street, Marrickville. The club offices are also located at 14 Rich Street. Further improvements and innovations are planned.

After their gym session (under the capable supervision of the club’s Strength and Conditioning Coach Graham Morris), the players moved onto Henson Park from about 5.45pm onwards. The playing surface at Henson Park is in as good a condition as it has been for several years, although this has been a particularly wet summer. With the Newtown and Cabramatta clubs having played a trial at the New Era Stadium grounds prior to Xmas, this time the Two Blues boys joined the Jets for a joint training session at Henson Park. All told about forty players (around twenty from each club) put in a vigorous workout comprising an array of ballwork and field exercises. The Cabramatta Ron Massey Cup coach Eddie Flahey had brought along his own coaching and team staff and they all took a keen interest in the progress of the training session.

The Newtown boys took on the Wanda Sand Hills on Saturday, 16th January. The sand hills have been a favoured venue for ultra-tough training hit-outs with many different Rugby League clubs over the years. The players and staff were entertained by club President Barry Vining at his Dolan’s Bay home for a well-received post-training barbecue. Barry reports that the boys were very polite and well-behaved and that they were welcome guests at his home.

The NSW Rugby League staged the annual Semi-Pro Day at Rugby League Central on Sunday, 17th January. This program is designed to educate and celebrate the players in the NSW Cup competition, which is the premier pathway to the NRL in NSW and New Zealand. The NSWRL Education Officer Greg Nichols was the convenor for the day. The Newtown club was very well represented, with around 220 players from most of the NSW Cup clubs being in attendance.

Guest speakers at the Semi-Pro Day included NSWRL CEO David Trodden, the NSWRL State of Origin coach Laurie Daley, Liam Fulton, Sean Spence and Paul Heptonstall. Another key feature of the day was a session conducted by Hugh Van Cuylenburg, the Founding Director of the Resilience Project. This program aims at providing younger players (especially the Rugby League demographic associated with the NSW Cup) with evidence-based practical strategies to build resilience and to help overcome setbacks in their career paths.

Remember that Newtown’s first trial match is now only a little more than two weeks away. The details are:

The details for Newtown’s third trial match occasion have been announced: