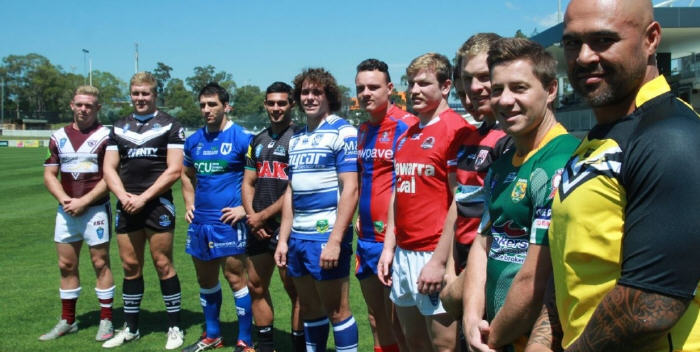 Newtown's Josh Davis pictured with players from all twelve teams competing in the 2015 VB NSW Cup.

Newtown Jets has named its team for the VB NSW Cup Round 1 clash versus Wests Tigers being played at Henson Park, Saturday 7th March, 3pm kick-off.

Saturday, 7th March at Henson Park is to be designated as BLUEBAGS DAY in tribute to the passing in recent months of famed Newtown RLFC identities Brian “Chicka” Moore, Frank Farrington and Horrie Kessey. We are encouraging supporters to wear retro Newtown items such as the classic Bluebags jersey (available on our merchandise website), the style of jersey that was worn by the legendary Chicka Moore in his Newtown RLFC playing days between 1962 and 1973.

There will be a minute’s silence prior to the kick-off.

Junior Sharks join the Jets at Henson
After a narrow loss and a draw in games played against the Bulldogs, our NRL partner the Sharks junior rep teams also play at Henson Park this weekend where they will take on the Sydney Roosters.

While Roosters home games we encourage all Newtown supporters to show their support for the two Sharks teams #UPUPCRONULLA.