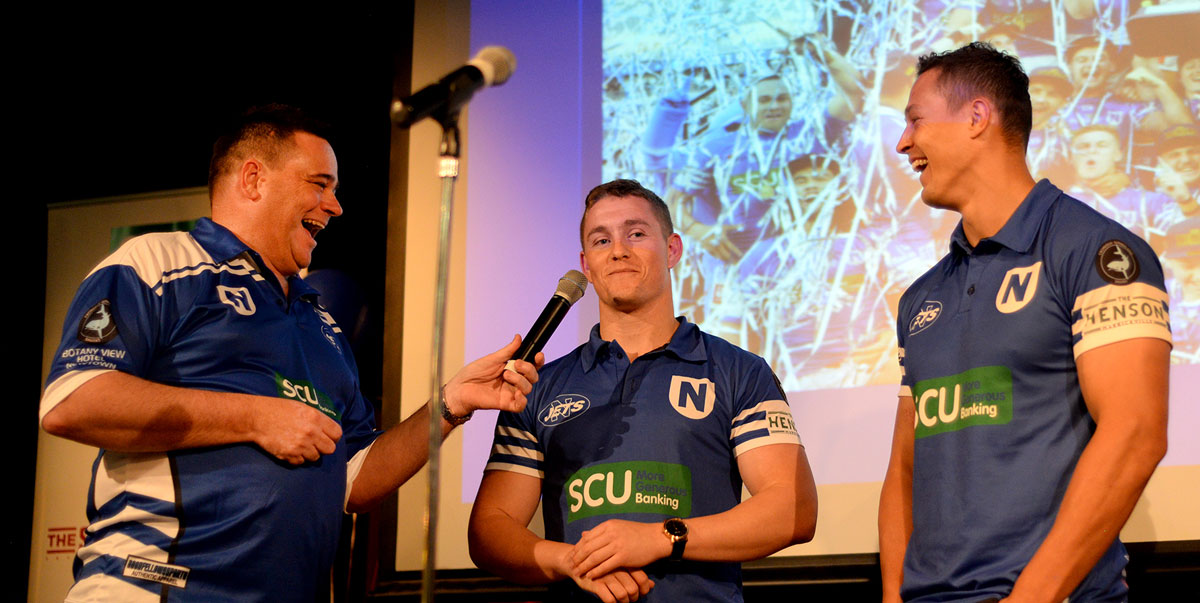 It’s smiles all round as Newtown Jets Director Alby Talarico (on the left) interviews Jets players Jack A. Williams and Scott Sorensen at the Mayoral Civic Reception held for the double-title winning Newtown Jets at the Petersham RSL Club on the 9th October 2019. Photo: Michael Magee Photography.

All Aboard For Take Off with the Newtown Jets in 2021!

After being grounded last season, the Newtown Jets will fly again in 2021 – and we want you to come along for the ride with a club membership! In 2020, many of our 2019 premiership stars like Sifa Talakai, Toby Rudolf and Sione Katoa successfully made the transition to the NRL, and in 2021 we’ll unleash a new generation of future first-graders onto Henson Park. When you become a Jets member, you’re not just buying footy tickets, you’re pledging financial support to our club and players, while also gaining access to exclusive members-only benefits.

Our “Keep the Jets Flying” members kept us alive in 2020 and we’re excited to see you all back at Henson for what promises to be another thrilling year of NSW Cup action. We offer seven different packages which cover every type of budget and click here for more information.

The Premier of NSW, Gladys Berejiklian, has said the wearing of face masks is now compulsory in public indoor locations and on public transport.
Not only can you comply with this edict in the interests of public health, at the same time you can lend financial support to the Newtown Jets as we head into the 2021 rugby league season.

You can also buy the Newtown Jets face masks directly from the Newtown RLFC office at 14 Rich Street, Marrickville, NSW 2204, or call 8488 8200.


The Young Henrys T-shirts recently advertised have sold out – but reinforcements will be available soon!

Young Henrys has been Newtown Jets’ official hydration sponsor since 2016, with NEWTOWNER being the beer of choice at Henson Park ever since. As we get ready for taking off into the 2021 season, Young Henrys are kindly donating 100% of the proceeds of this extremely popular tee to our club. Pre-orders will be accepted soon for the next production run!


The Newtown Jets pre-season squad has been back in training since Thursday, 7th January.

This year’s trials program is as follows:

The Newtown RLFC regrets to announce the recent passing of former player Mark O’Brien. Mark was a Canterbury-Bankstown juniors product who played with Newtown from 1977 to 1983, a very significant period of time in Newtown’s history.

He was a versatile player who appeared with Newtown on 55 occasions in first grade, and played at halfback, five-eighth, in the centres and on occasions on the wing. Mark was a very popular identity with his team-mates and with Jets supporters. The Newtown RLFC extends sincere condolences to his family members and friends.

All the best to Scott Sorensen.

The Newtown RLFC extends best wishes to hard-working second-rower Scott Sorensen who has signed with the Penrith Panthers for the 2021 season. Scott captained the Newtown Jets to victory in the 2019 Canterbury Cup NSW grand final and in the 2019 NRL State Championship Final. Anyone who has watched Scott’s heartfelt contribution to the top-quality documentary,  “We Are The Champions: Newtown Jets – The Rugby League Story of the Year”, would know that playing for the Newtown Jets really meant something special to this man