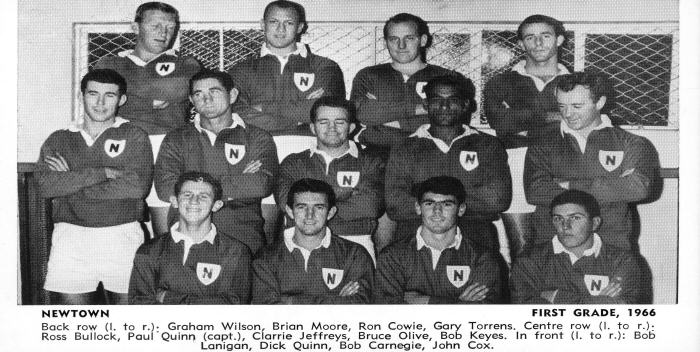 Paul Quinn was the Newtown first grade team captain in the 1966 season and is pictured second from the left in the middle row of this photo.

Newtown RLFC salutes the career of the late Paul Quinn 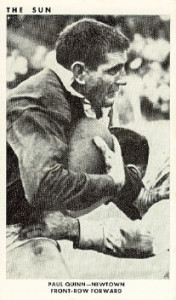 The Newtown RLFC regrets to announce the recent passing of the former Newtown club captain and Test front-rower Paul Quinn, who played with the club from 1964 to 1967 and who achieved many representative selection honours during his football career.

Paul played originally with the Gerringong club in Group 7 on the NSW South Coast and made the Southern Division representative team that played Great Britain in 1962. In 1963 he gained selection for NSW Country and NSW, and then won Test Match selection for Australia against both New Zealand and South Africa. His crowning achievement was being selected in the 1963 Australian Kangaroos squad that toured Great Britain and France. Paul played in Tests against Great Britain and France on that tour, including the famous Second Test against Great Britain at Swinton in November 1963 when Australia won the Rugby League Ashes in Britain for the first time.

He signed with Newtown on his return to Australia and played with the Bluebags from 1964 to 1967, captaining the club’s first grade team for most of that period. Under his captaincy Newtown narrowly missed the semi-finals in 1965, and then made the finals in 1966 when the Bluebags lost a controversial elimination semi-final against Manly-Warringah. He won further representative honours with Test Match appearances against France in 1964, and then a place on the Australian team’s tour of New Zealand in 1965.

After leaving Newtown Paul represented NSW Country Firsts from 1968 to 1970, and finished his playing days as captain-coach of the Canberra Workers RLFC in the strong Group 8 competition. He continued his links with the Rugby League code by way of his role as a co-commentator and match analyst with ABC Radio Canberra at Canberra Raiders home games from 1982 into the 1990’s.

Paul was honoured with selection in the Newtown RLFC Team of the Century in 2008. He is well-remembered by an older generation of Newtown supporters for his strong forward play and leadership in his four seasons with the club.

The Newtown RLFC extends sincere condolences to all the members of his family. His funeral service is to be held on Friday, 26th June at 11.00am, Holy Trinity Catholic Church, Strangways Street, Curtin ACT.