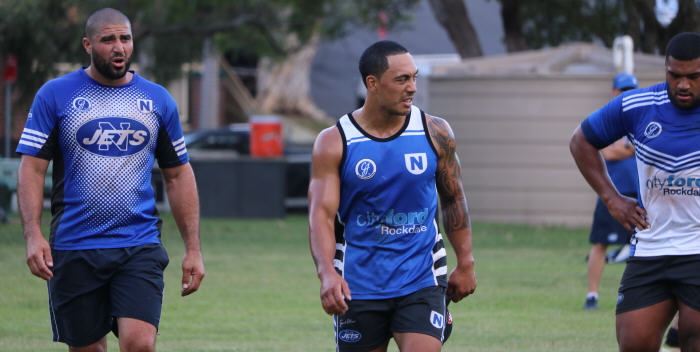 Three of the best – (from left) Khalid Deeb, Kurt Kara and Saulala Houma have given the Newtown Jets great service in the second decade of the 21st century. Khalid is making a comeback to the playing arena this year and his pre-season training form and application have been top class. Photo: Wayne Leong

Newtown’s first trial for 2017 is only ten days away

It might be Sydney’s hottest January on record, but that hasn’t stopped the Newtown Jets from putting in a thoroughly-disciplined and well-planned pre-season training program. The Jets began their four-days-per-week regimen back in early November and their first trial match (v North Sydney at Henson Park on Saturday, 4th February) is now just ten days away.

Jets head coach Greg Matterson is heading into his tenth season in what is now the Intrust Super Premiership NSW competition, formerly known as the NSW Cup. Matterson’s coaching tenure in the top grade is a record for the Newtown club and is probably only surpassed in length by Wayne Bennett’s stint at the Brisbane Broncos from 1988 to 2008. George Ndaira, who played NRL with St George-Illawarra, South Sydney and the Newcastle Knights and has had coaching experience with the Knights, has come on board at Newtown as the newly-appointed assistant-coach.

Newtown’s strength and conditioning coach Graeme Morris is well-qualified in his specialist field and is highly regarded by his peers. His innovative strength and conditioning program that has the 2017 Jets players in great shape has attracted the attention of other NRL and Super League clubs, as well as the Melbourne Demons AFL club. Take a look at Graeme’s program for the 2017 Newtown Jets: http://insidertrainingapp.com/newtownjets

Get in now for your 2017 Newtown Jets clothing and merchandise. You can contact Olga directly on 0412 712 612 or olauricella@newtownjets.com, or buy online from: www.newtownjetsclothing.com.au

The 2017 season has nearly started and now’s the time to take out a 2017 Newtown Jets club membership. There are great packages for a variety of budgets and circumstances:  http://www.newtownjets.com/jets-membership-2017/