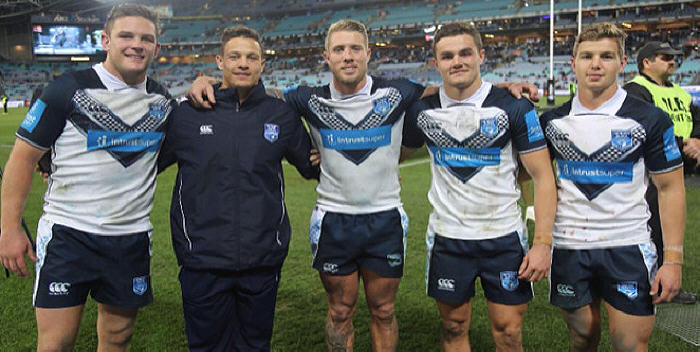 The Newtown Jets had a record five representatives selected in the 2018 NSW Residents rugby league rep team, and they are all pictured here at ANZ Stadium on Sunday evening. From left to right: Kurt Dillon, Scott Sorensen, Aaron Gray, Kyle Flanagan and Blayke Brailey. Photo: Supplied courtesy of the NSW Rugby League

Newtown Jets halfback Kyle Flanagan captained the Intrust Super Premiership NSW Residents team to a comprehensive 36-20 win over Queensland Residents in the rugby league representative match played at ANZ Stadium on Sunday evening. This match was played as the main curtain-raiser to State of Origin II.

Jets second-rower Scott Sorensen had originally been named as the team captain but he was a late withdrawal. Kyle Flanagan led the team with considerable aplomb, and for good measure he converted all six of the Residents team’s tries. Flanagan had three other Newtown Jets comrades in the rep team – centre Aaron Gray, front-rower Kurt Dillon and hooker Blayke Brailey. All told, this was the largest number of Newtown players in a NSW Rugby League senior level representative team in more than one hundred years.

The NSW Residents ran up a 30-0 lead at halftime but inevitably Queensland fought back in the second half, scoring twenty points to make the final margin more respectable. The Jets had another player, centre Reubenn Rennie, named in the team but he withdrew earlier in the week because of injury.

The Newtown Jets are back at Henson Park this Saturday, 30th June, to play Wentworthville. This match will be televised live on Channel Nine and kicks off at 1.00pm.